Shake your booty to brukdown and punta rock in Belize 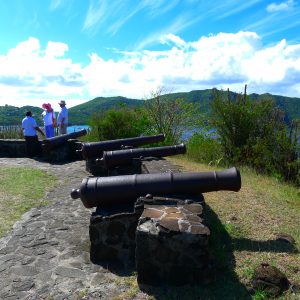 Chances are you’ve seen the oft-played TV commercial about gorgeous places to settle down in Belize on the Caribbean coast of Central America.

In the ad, we learn about the laid-back style of living there on idyllic, palm-dotted islands and along the mainland’s sugary white beaches – but for some reason, all to a rather dreary mood set by elevator music.

One is called “brukdown,” said to mean something like “broken down calypso.” Whatever it means, you can’t help shaking your body line to lively, accordion-backed tunes like “Good Mawnin’ Belize,” played there each morning on a number of radio stations to help get their listeners’ juices flowing for the day.

A particularly spunky brukdown ditty is “Run, Mr. Peters, Run” (https://www.youtube.com/watch?v=PYr3gkGXzA8) recorded by the father of the genre, Wilfred Peters. 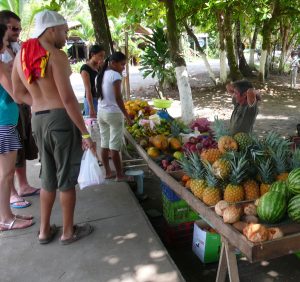 Tagged “the King of Brukdown,” Peters and his Boom and Chime band entertained brukdown lovers all over the world before he died a few years ago at 79.

Another popular booty-shaker along the coastal villages of Belize (and also in nearby Guatemala, Honduras and Nicaragua) is “punta” music.

This one comes from a mish-mash of cultures, starting with the Carib Indians whose ancestors from South America started migrating up the chain of Caribbean islands thousands of years ago.

Later on, African blacks from a wrecked slave ship ended up on the island of St. Vincent, bred with the Caribs and produced a race of “Black Caribs” (aka “Garifunas”).

The cultural stewpot next boiled over with French spices when the tricolor flag was raised over St. Vincent. Then, English mutton was stirred in for body when Great Britain’s Union Jack replaced the tricolors. 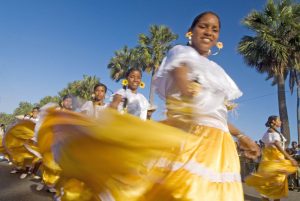 Dancers shake it up to punta rock music.

The Brits – to punish the Black Caribs/Garifunas for siding with the French in several wars – moved them to the Honduras Bay island of Roatan, after which a good number of them drifted over to settlements on the Central American mainland.

Garifuna villages along the coast of what’s now Belize popped up in 1802, prompting a national holiday celebrated each year.

The holiday’s superstar, of course, is punta music (which over the years evolved to today’s “punta rock”). Its distinctive African-style call-and-response singing is backed by maracas and drums made from hollowed tree trunks covered on one end by animal hides.

A note to tourists: If you’re lucky enough to be in Belize on Nov. 19, don’t be surprised to see thousands of Garifunas parading, partying, dancing and otherwise celebrating their Afro-Caribbean/French/British roots. That day is their annual “Garifuna Settlement Day,” marking the settlement of the villages long ago on the beaches of Belize.