Havana, Nov 26 (EFE).- The Cuban Council of State on Saturday declared nine days of mourning for the death of former president and revolutionary leader Fidel Castro who died at the age of 90.

Castro died late on Friday Nov. 25. The news was announced in an address on state television shortly thereafter by the leader’s brother and current president, Raúl Castro.

A council statement said “during the national mourning public activities and shows will be halted, the national flag will be flown at half-mast in public buildings and military establishments and radio and television will broadcast informational, patriotic and historical programming.” 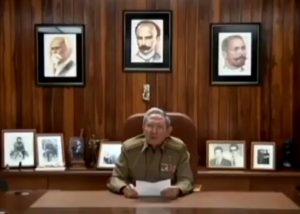 A TV grab made available by Cubavision on 26 Novemeber 2016, shows the Cuban state TV broadcast in which current Cuban President, Raul Castro, announces the death of his brother Fidel Castro on 25 November 2016. Cuban former President Fidel Castro has died at the age of 90. EFE

Governments and citizens around the world on Saturday reacted to the death of divisive Cuban revolutionary leader Fidel Castro, offering contrasting messages of condolence and celebration.

Castro died late on Friday Nov. 25, at the age of 90. The news was announced in an address on state television shortly thereafter by the leader’s brother and current president, Raúl Castro.

There were immediate and contrasting reactions from from the Americas.

President of Venezuela Nicolás Maduro, a traditional ally of Cuba, called upon revolutionaries of the world to continue Castro’s legacy, adding that the Cuban had helped lay “the path to the liberation of the people.”

Mexican President Enrique Peña Nieto, also one of the first leaders to publicly express his condolences, called Castro a great friend of Mexico and “an emblematic figure of the 20th century.”

Colombian Marxist-Leninist guerrilla group, FARC, exalted Castro as the “most admirable revolutionary of the 20th century.”

FARC is in the process of signing a peace accord with the Colombian government following decades of civil war.
Bolivian president Eva Morales spoke of his great sadness upon hearing the news of Castro’s death. 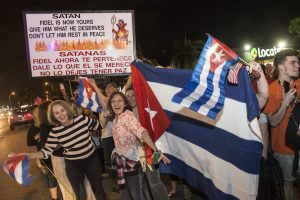 However, in the United States, dozens of Cuban ex-patriots gathered in Miami, Florida, to celebrate the death of the leader whose regime provoked an exodus of Cuba’s middle classes.

Speaking to EFE, Ramón Saúl Sánchez, leader of the exiled Cuban Democratic Movement lamented that the death of “tyrannical” Castro did not signify freedom for the people of Cuba.

Across the Atlantic, both Spain and France offered their condolences early on Saturday.

“My condolences to the government and authorities of Cuba for the death of ex-president Fidel Castro, a significant historical figure,” wrote Spanish Prime Minister Mariano Rajoy on Twitter.

French President Francois Hollande said Castro represented a proud rejection of foreign domination, adding that the leader “embodied the Cuban Revolution both in the hopes it raised and later in the disappointments it provoked.”

Russian President Vladimir Putin described Castro as the symbol for the entire era of modern history.

Following the Cuban Revolution in 1959, Castro went on to act as PM and then president of the Caribbean island until 2008 when he stepped aside for his brother Raúl Castro.

For decades, Cuba maintained it dissident politics despite the antagonism from the anti-Communist US.
However, the Cuban regime has been criticized for human rights abuses such as the use of post-revolution summary executions, political purging and censorship.