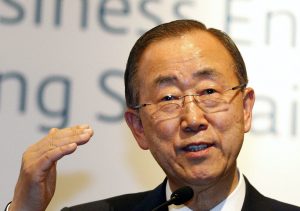 United Nations, Nov 26 (EFE).- U.N. Secretary-General Ban Ki-moon said Saturday that Fidel Castro’s Cuba made strides in areas such as education and health and urged the Caribbean island to continue along its current reform path in pursuit of greater prosperity.

“At this time of national mourning, I offer the support of the United Nations to work alongside the people of the island,” the U.N. News Centre quoted Ban as saying.

Ban said he had had a lively meeting in Cuba in January 2014 with Fidel Castro, who passed away Friday night at the age of 90, adding that they had discussed topics including sustainable development and climate change.

Under the leadership of Fidel Castro – who formally resigned as Cuba’s president in 2008, two years after falling ill with diverticulitis and ceding power to his younger brother – Ban said that Cuba had “made advances in the fields of education, literacy and health.”

“I hope that Cuba will continue to advance on a path of reform and greater prosperity,” he added, referring to Raul Castro’s project of “updating” Cuba’s socialist economic model by, among other things, allowing more scope for private enterprise and foreign investment.