NASA engineer creates metallic fabric that can be made in space

Los Angeles, May 25 (EFE).- As a boy, he played with a toy boat his father made from a cardboard box and now Spaniard Raul Polit-Casillas has created for NASA a metallic fabric that can be made in space with 3D printers and used to make spacesuits and parts of spaceships.

The manufacture of metals in 3D printers “has potential uses in space and on Earth,” the spatial architecture systems engineer, who works at NASA’s Jet Propulsion Laboratory in Pasadena, California, told EFE.

“In space, the uses (include) being able to create antennas or large surfaces, creating systems to provide shade and therefore heat control, protecting against micrometeoroids and making parts of spacesuits,” he said.

Born in the Spanish town of Jaca 38 years ago, Polit-Casillas grew up surrounded by the fabrics of his mother, a fashion designer, and the creative influence of his late father, who was an artist and professor of printing technique. 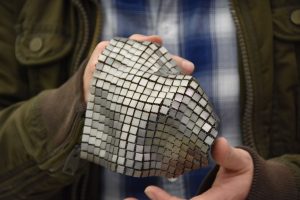 The imaginative spark of his parents is reflected in his own invention, the prototype for which – made of steel and titanium – shines like a metallic checked cloth.

“The project was born out of the need to create a system that would be adaptable and could be, in principle, made in space,” said Polit-Casillas about the engineering challenge.

“With that objective, we began … thinking about fabrics. The problem with (fiber) fabrics is that the machines to make them are very complicated; they are looms, and we don’t have looms in space,” he said.

So, he set about creating a “multi-use” metallic fabric that could, among other things, cover expandable space habitat structures, robot vehicle wheels and improve surfaces so that spacecraft can descend into atmospheres.

On Earth, the fabric could protect work clothing, improve wheel traction on snow and be used on building facades, among other things.

Since the fabric “reflects light on one face, it’s like a heat radiator on the other face, … it’s able to adapt to practically any geometry and … resists tensions in the plane of the fabric,” he said.

Polit-Casillas studied industrial engineering with an emphasis on robotics and has a Masters in architecture from Spain’s Polytechnic University of Valencia.

Later, he focused on space sciences and studies at the International Space University in Strasbourg, France.
Polit-Casillas has been working with the JPL’s design and construction team for space habitats since 2011.

“The nice thing about the story is that in the end we’re all working for the good of humanity and many of the things we make here … benefit everyone,” he said.