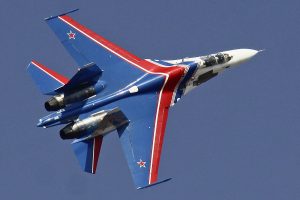 A Sukhoi Su-27 fighter of the ‘Russian Knights’ aerobatics team of the Russian Air Force is seen during the show program on the fourth day of the Aero India 2013 at the Yelahanka air base in the southern Indian city of Bangalore, 09 February 2013. The 9th edition of the Aero India aviation fair is being held from 06 to 10 February in Bangalore and is expected to show more than 50 civil and military aircraft from leading manufacturers across the globe. EPA/STRINGER

Washington DC, Jan 29 (EFE).- The State Department of the United States on Monday accused Russia of unsafe military practices in international airspace over the Black Sea.

According to the US, the incident occurred Monday when a Russian Su-27 fighter jet flew within five feet (1.5 meters) of an EP-3 patrol aircraft of the US Navy, violating international laws and agreements.

The US State Department said “the Russian side was flagrantly violating existing agreements and international law, in this case the 1972 Agreement for the Prevention of Incidents On and Over the High Seas (INCSEA).”

The US also accused the Russian pilot of crossing directly in front of the flight path of the American jet.

“This is but the latest example of Russian military activities disregarding international norms and agreements,” the statement added.

The State Department called on Russia to “cease these unsafe actions that increase the risk of miscalculation, danger to aircrew on both sides, and midair collisions.”