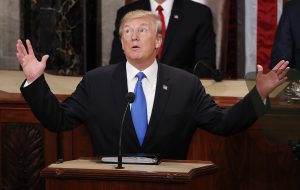 US President Donald J. Trump delivers his first State of the Union from the floor of the House of Representatives in Washington, DC.

Washington DC, Jan 30 (EFE).- The president of the United States Tuesday asked the Democrats and Republicans to work jointly to reform immigration laws and create a safe, modern and lawful immigration system.

“So let us come together, set politics aside, and finally get the job done,” Donald Trump said in a call to Democrats and Republicans to work together, during his State of the Union speech to Congress.

Trump defended the “four pillars” of the immigration proposal made this month, which includes access to citizenship for 1.8 million illegal immigrants who were brought here by their parents at a young age in exchange for $25 billion to build a border wall with Mexico.

This figure of 1.8 million immigrants is higher than the 690,000 young people, known as “dreamers”, who are currently able to work and are protected from deportation by the Deferred Action for Childhood Arrivals program, expiring on Mar. 5, the date set by Trump last September.

“Under our plan, those who meet education and work requirements, and show good moral character, will be able to become full citizens of the United States,” said Trump, who stressed that the figure of 1.8 million is almost three times more than what was his predecessor, Barack Obama, offered with DACA.

Trump insisted on the need to secure the border with Mexico and asked Congress to expressly deport all immigrants who cross the border in an irregular manner regardless of their country of origin.

Currently, immigrants only from Mexico and Canada can be expelled expressly.

Besides, Trump asked Congress to end the so-called “visa lottery for diversity”, which randomly assigns up to 50,000 visas to foreigners, and to have a merit-based system that replaces the current family reunification method, known by its detractors as “chain migration.”

“It is time to begin moving towards a merit-based immigration system – one that admits people who are skilled, who want to work, who will contribute to our society, and who will love and respect our country,” added the president.

So far, Trump’s immigration reform has received a cold response from Democrats, and it is unclear whether lawmakers from both parties will be able to reach an agreement before Feb. 8, when a budget bill expires, which the Democratic opposition does not seem to be willing to renew without a solution for the “dreamers.” 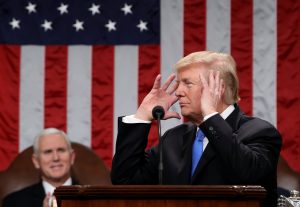 Trump defends his success as president, calls Congress for unity

Washington DC, Jan 30 (EFE).- The President of the United States defended Tuesday the extraordinary success he has achieved since taking office in 2017, and called on the Congress to work together and set aside differences.

“Over the last year, we have made incredible progress and achieved extraordinary success,” Donald Trump said at the beginning of his first presidential address on the State of the Union before the US Congress.

Trump noted that “let’s begin tonight by recognizing that the state of our union is strong, because our people are strong,” adding “and together we are building a safe, strong and proud America,”

The US president also asked the Democrats and Republicans of the Congress ” to set aside our differences, to seek out common ground, and to summon the unity we need to deliver for the people. This is really the key. These are the people we were elected to serve. “

Next article - US tourist industry touting Cuba as destination, despite Trump’s obstacles »