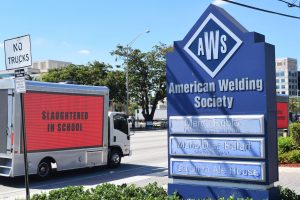 Three tucks with signs adressed at republican senator Marco Rubio circulate in Miami, United States, 16 February 2018, to demand action for gun control after the shooting at a Florida school earlier this week. The messages were taken to the senator’s office as part of a campaign promoted by the Avaaz organization. EFE

Miami, Feb 16 (EFE).- Three trucks with giant signs addressed to Republican Sen. Marco Rubio drove through the streets of Miami Friday to demand he do something to enact gun control and so avoid more massacres like the one that occurred this week at a school in his home state of Florida.

“Slaughtered in school…And still no gun control?…How come, Marco Rubio?” is the message distributed across the sides of three trucks on their way to the senator’s office, as part of a campaign promoted by the Avaaz activist group and backed by other organizations.

“Many mothers who are crying today for their children would have made these signs. Today we wanted to bring that conversation into the streets, since Rubio represents a political class that still hasn’t answered any of our questions,” Avaaz spokesman Oscar Soria told EFE.

The project is inspired by the movie “Three Billboards Outside Ebbing, Missouri,” about a mother who asks police, on three enormous signs, to give her an explanation for the rape and murder of her daughter

Today’s three signs were used in a similar fashion by Avaaz, whose president, Emma Ruby-Sachs, slammed the senator’s “toothless response to the shooting, calling it ‘inexplicable.’ We call that ‘inexcusable.'”

“Florida has very lax gun laws. Rubio has been supported by the NRA (Natonal Rifle Association) and has never tried to reform those laws. He’s one of the senators who has received the most contributions from the NRA, besides having an

“Over the past year there were 334 mass shootings, yet there has been no new federal gun law since 1994,” she said.