Washington, Feb 28 (EFE).- Hope Hicks, the White House communications director and longtime adviser to President Donald Trump, will resign “in the coming weeks,” Press Secretary Sarah Huckabee Sanders confirmed on Wednesday.
Hicks, who began working with Trump three years ago and joined his presidential campaign in 2016 with no previous experience in politics, has been one of the people who has lasted longest among the magnate’s close advisers since he began his run for the White House.

“Hope is outstanding and has done great work for the last three years,” Trump said in a statement. 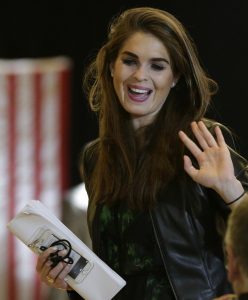 Trump communications director Hope Hicks is seen at the conclusion of Republican presidential candidate Donald Trump’s press conference on Veteran affairs in the lobby of Trump Tower in New York, New York, USA, 31 May 2016 (issued 28 February 2018). A day after testifying in the Russia probe, one of President Trump’s advisers, Hope Hicks, said she plans to resign as White House Communications Director. EFE

“She is as smart and thoughtful as they come, a truly great person. I will miss having her by my side but when she approached me about pursuing other opportunities, I totally understood. I am sure we will work together again in the future,” the president added.

Meanwhile, Hicks said that she had “no words” to adequately express her gratitude to the president, adding that she wished him and his administration “the very best.”

White House Chief of Staff John Kelly also expressed his thanks to the 29-year-old, saying “When I became chief of staff, I quickly realized what so many have learned about Hope – she is strategic, poised and wise beyond her years.”

He added that “She became a trusted adviser and counselor and did a tremendous job overseeing the communications for the president’s agenda including the passage of historic tax reform. She has served her country with great distinction. To say that she will be missed, is an understatement.”

Hicks, who had worked as a model, worked for Trump as a press aide until she was formally named White House communications director last summer.

The news of her departure comes one day after she testified for about eight hours before the House Intelligence Committee within the framework of the investigation into possible coordination between Trump’s campaign and the Russian government to influence the 2016 elections.

Nevertheless, according to The New York Times, citing different sources privy to her intentions, Hicks’ resignation has nothing to do with the investigation or her testimony, but rather comes after she had been considering her options for several months.

According to the daily, Hicks informed her colleagues that she had achieved her objectives with a job that made her one of Washington’s most powerful figures, and there never would have been a “perfect” time to leave.

During her testimony on Tuesday before House lawmakers, Hicks admitted that she had told “white lies” for the president, although – she claimed – not on any “substantive” matters.