Washington, Mar 1 (EFE).- US President Donald Trump said Thursday that he plans to impose tariffs of up to 25 percent and 10 percent on imports of steel and aluminum, respectively, from certain countries. 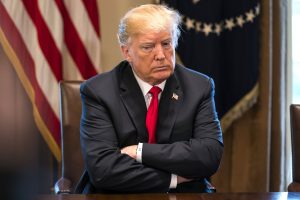 US President Donald J. Trump attends a meeting with leaders from the steel and aluminum manufacturing industries in the cabinet Room of the White House in Washington, DC, USA, 01 March 2018. EFE

Trump, who had until April to act on a Commerce Department report on the effects of imports on US steel and aluminum producers, told reporters his administration would announce the tariffs next week.

Executives from several steel and aluminum companies, including Arcelor Mittal, Nucor and US Steel Corporation, attended the meeting with Trump.

The Commerce Department report, which was sent to the White House in mid-February, recommended that the president slap tariffs of up to 50 percent on imported steel and aluminum, and left open the possibility of setting quotas.

Trump did not say which countries would be subject to tariffs, but Commerce Secretary Wilbur Ross said in the document, known as a Section 232 report, that China was “the largest source of excess steel capacity” in the world.

The US government also identified India, Brazil, Russia and South Korea as countries that might be subject to tariffs.

Trump, who vowed during his presidential campaign to protect American jobs, noted the toll that imports have taken on US steel and aluminum companies.

“What they do is they dump massive amounts of product on our country, and it just kills – it destroys our companies and our jobs. And it’s been happening for so many years, and we are not the beneficiary,” Trump said.

- Previous article « Events Around the Bay