Washington, Aug 27 (EFE).- The White House on Monday reversed its earlier decision to return the US flag to full-staff after Republican Sen. John McCain’s death on the weekend, placing the flag once again at half-staff and stating that it would remain at that level until after the Arizona lawmaker’s funeral.

The tepid reaction of the Donald Trump administration to McCain’s death had continued to generate controversy on Monday after authorities raised the US flag at the presidential residence to full-staff from half-staff after only a little more than a day-and-a-half of “mourning.”

Despite the fact that the bad relationship between Trump and McCain was well-known publicly, the social networks reacted on Monday with a mixture of amazement and indignation to the fact that the flags at the White House were once again waving from the top of the flagpoles after being lowered after the senator’s death from brain cancer on Saturday. 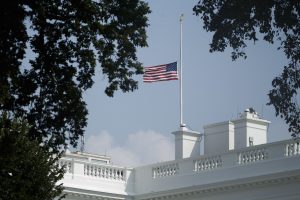 This decision by the White House also offended veterans associations who on Monday urged the president to show the “appropriate” respect for a Vietnam veteran who was a POW for more than five years.

“I strongly urge you to make an appropriate presidential proclamation noting Senator McCain’s death and legacy of service to our nation, and that our nation’s flag be half-staffed through his internment,” said American Legion national commander Dennis Rohan in an open letter to Trump.

The American Legion has more than two million members.

Finally, at mid-afternoon, the White House once again lowered the flag to half-staff in honor of McCain.

“Despite our differences on policy and politics, I respect Senator John McCain’s service to our country and, in his honor, have signed a proclamation to fly the flag of the United States at half-staff until the day of his interment,” said Trump in a statement, by way of explaining his reversal on the issue.

According to reporters who regularly cover the White House, it is traditional after the death of a person such as McCain – a Vietnam War veteran and POW who was tortured during his captivity, ultimately served for decades in the Senate and was the Republican presidential nominee in 2008 – for flags to be lowered to half-staff until after the funeral.

McCain is scheduled to be buried on Sunday, Sept. 2, at the Naval Academy in Annapolis, Maryland, after a funeral service is held at the National Cathedral in Washington on Saturday.

Since Trump has been president, McCain has criticized his foreign policy and used his vote to derail a Trump-supported plan to eliminate ObamaCare, as well as publicly warning about the president’s “egoism” and apparent affinity for “autocrats.”

Notwithstanding these differences, however, one of the most bitter disputes between the two men arose during Trump’s 2016 presidential campaign, when the mogul said that he did not consider McCain a hero because he liked people who were not “captured” by the enemy during wartime.

Trump’s only official reaction to McCain’s death prior to the Monday afternoon announcement about the flag had come on Twitter, where he wrote: “My deepest sympathies and respect go out to the family of Senator John McCain. Our hearts and prayers are with you!”