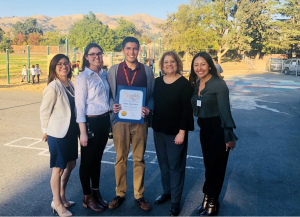 Launched in 2000 by the Afterschool Alliance, Lights On Afterschool is the only nationwide event celebrating afterschool programs and their important role in the lives of children, families and communities.

Representative Erika Salazar also presented Think Together McCollam Elementary Site Coordinator Ricardo Molina with a Certificate of Recognition from the California Legislature Assembly for the great work Think Together is doing at McCollam Elementary – 89% of McCollam students feel they belong at the program and 90% feel like there’s an adult who cares for them in the program. Second-grader Aaliyah Austin said, “I like coming to program because I get to finish my homework and I like the fun stuff we do.” 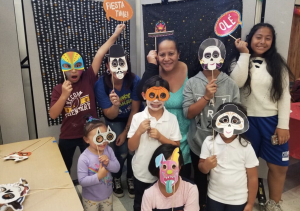 Think Together students and their parents celebrate Lights On Afterschool with a Dia de los Muertos-themed photo booth.

1.6 million kids are currently enrolled in afterschool programs in California, the majority of which are funded through the state After School Education and Safety Program (or ASES for short). Many kids from low-income families rely on ASES programs, but ASES is currently at risk. While the costs, demands, and expectations of California’s afterschool programs have consistently increased, state funding has not kept pace for over a decade. And 1.2 million children are still alone and unsupervised after school in California.

The event called for expanded afterschool opportunities so that every child who needs a program has access to one, and discussed the benefits of afterschool programs, including inspiring children to learn, keeping them safe in the hours when juvenile crime peaks, and providing relief to working families. Think Together currently partners with four districts in the Bay Area serving over 6,000 kids annually.