San Francisco, Dec 10 (EFE).- The ancient Library of Alexandria was a massive project that more than 2,200 years ago sought to gather together all human knowledge, an ambition being replicated digitally in the 21st century by the Internet Archive, a non-profit organization founded by one of the pioneers of the World Wide Web.

Brewster Kahle, president and founder of the archive, told EFE in an interview that the commitment he made to himself in the first years of this technology was to create a library. 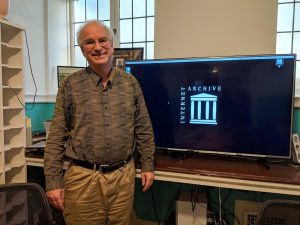 “The average Internet entry vanishes after 100 days. How can you preserve a culture from which the content keeps disappearing? In the same way that Wikipedia is the Internet encyclopedia, we see ourselves as the library,” Kahle, who was already exploring the virtual world in the 1980s and has been inducted into the Internet Hall of Fame, said.

Kahle directs an Internet Archive staff of some 150 people, between employees and volunteers.
In its mission to be a universal recipient of knowledge, the archive is structured in six different sections: digital books and texts, audio and music recordings, videos, images, software programs and websites.

For the latter segment, the organization has developed a technology dubbed the Wayback Machine that periodically downloads the content (with both appearance and interfaces as links) of websites around the world. This varied content is immediately stored, organized and made available to all who wish to consult any part of it.

If, for example, a researcher, a journalist, or any user for that matter, wishes to check the appearance of an online domain back in the year 2000, all it takes is a search through the Wayback Machine to obtain an exact replica.

This digital library currently has 330 billion websites stored in the dozens of gigantic servers that the organization has available around the San Francisco Bay Area.

In the Internet Archive one can also consult and even borrow (as from a conventional library but in digital format) 20 million books and texts, many of them digitized by workers in the organization.

“Authors’ rights make sure that many books written during the 20th century are neither digitized nor available on the Internet. Older works, however, are free of authors’ rights and therefore are on the web. Meanwhile we’re losing a bibliography of immense value to humanity,” Kahle said.