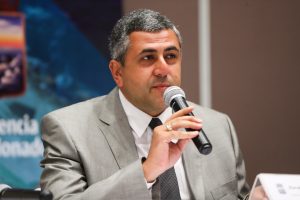 WTO Secretary-General Zurab Pololikashvili told reporters during the presentation that the decision to grant the certification followed an extensive review in more than 30 specific areas.

“It’s a great strategic plan for the next four years and I’m sure there will be many new projects, many initiatives in Punta del Este,” the Georgian diplomat said during a press conference in the resort city, where he is vacationing with his family.
Pololikashvili stressed that the WTO certification reflects not only on the qualities of Punta del Este, but also on the caliber of the municipal and regional governments.

“We began the project three years ago. I think it is a great success and a great example to all tourist destinations on how the public and private sectors can work together,” he said.

Uruguay’s tourism minister, Liliam Kechichian, was on hand for the presentation and said that being the first city to obtain a WTO certification adds to the “prestige” of Punta del Este.

- Previous article « Raul Castro urges Cubans to prepare for the worst vs. the US