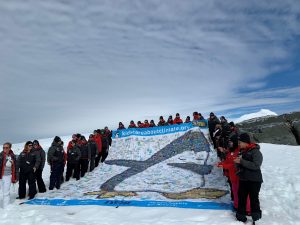 Hydrurga, Antarctica, Jan 10 (EFE).- With drawings of penguins and coral, Australian Marji Puotinen highlighted in Antarctica the project that enabled her to awaken the interest of more than 1,200 children around the world about climate change.

On the eighth day of the Homeward Bound expedition, where 80 female professionals and scientists are making a scientific tour of Antarctica, the group visited Hydrurga Island, located at the entrance to the White Continent’s Gerlache Strait and home to assorted species of penguins, cormorants and Weddell seals.

Children are “really concerned” about climate change, Puotinen, with the Australian Institute of Marine Science, told EFE, unfolding a huge banner she sewed by hand with the drawings made by more than 1,000 kids depicting penguins crying and factories polluting the environment.

Puotinen said that she “had a dream” in the middle of the night about a way to get children around the world “engaged” to learn about the climate change.

The project developed by the geographer, who is an expert in the sustainable use of marine ecosystems in northwestern Australia, got rolling when she asked what penguins and coral reefs had in common.

Her conclusion was that, although the frozen polar regions where assorted types of penguins live are completely different than the tropical waters that are home to coral reefs, both are threatened by ocean warming and urgent action is needed to save them.

In her judgment, we’ve already been able to see the first consequences of ocean warming because sea waters that are too warm are killing huge swaths of coral reefs and the loss of polar ice is threatening animals at the top and bottom of the world and raising ocean levels.

That, and the need to explain to her children why her work on marine biology expeditions takes her away from home for so long led Puotinen to think about “a drawing contest” for kids between 5 and 14 years old about what they love most about penguins, other polar creatures and coral reefs, a project she initially thought of for her local school.

But, in less than two months, between last September and October, the contest’s Web site – “Kids Care About Climate Change” – received 1,246 enrollments, some of them in groups, from 11 countries: Australia, Canada, Denmark, France, Germany, India, Mozambique, Singapore, South Africa, the United Kingdom and the United States. 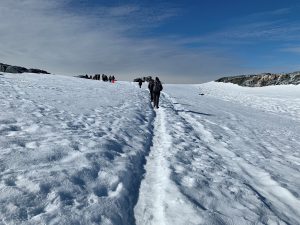 Puotinen told EFE that she was shocked and inspired after receiving the registrations from 120 different schools and that told her that climate change matters greatly to children, adding that the initiative has united the kids with their parents and teachers on the issue.

The kids’ parents, teachers and friends helped them to learn about the issue and now they are looking for a way to take action and should be supported, she added.

The winner of the contest, selected via a system of online voting, was Reyansh Koul, 9, living in Singapore, who submitted a drawing in which a penguin, upon seeing all the pollution around him, is asking “Where are we going to go now?”

Puotinen, who holds a degree in geography and whose career includes working to analyze how marine ecosystems are affected by the waves generated by tropical storms, thermal stress and pollution, said that now it’s necessary to put into practice what the children have suggested: to find a way to halt pollution.

The Homeward Bound expedition, founded by Fabian Dattner, set sail on Dec. 31 from the far-southern Argentine port of Ushuaia on board a vessel bearing the same name.

The tour of Antarctica will last until Jan. 19 and one of the expedition members is Christiana Figueres, a key leader in the fight against climate change and in increasing female empowerment.

Homeward Bound, supported by the Spanish infrastructure and renewable energy firm Acciona, is a global initiative for women in the STEMM (science, technology, engineering, mathematics and medicine) fields with an eye toward increasing their visibility as leaders on matters of global import.