Tucson, Arizona, Feb 25 (EFE).- Arizona’s Grand Canyon, declared one of the seven natural wonders of the world and known for its breathtaking panoramic views, was formed over millions of years, but on Tuesday, Feb. 26, will complete its first century as a US national park.

More than 6 million people every year visit this magical attraction, included on an infinity of bucket lists, and which has been used to shoot scenes for such films as “Thelma and Louise” and “Grand Canyon.”

Visiting the Grand Canyon got easier for more people after it was declared a national park in 1919, though by the year 1905 the luxury El Tovar Hotel had already opened its doors right on the rim of its soaring cliffs.

Carved out of the earth by the Colorado River over millions of years, the Grand Canyon is 277 miles (446 kilometers) long, up to 18 miles wide and 1 mile deep. 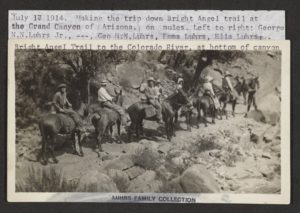 On the surface of its gigantic reddish cliffs can be observed the different geological strata stacked up over the past 2 million years.

It was declared a national park on Feb. 26, 1919, by President Woodrow Wilson, which meant greater protection for this treasure and the animals whose habitat it is, some of them in danger of extinction.

“The Grand Canyon is much more than an Arizona treasure,” it is a “national treasure” that attracts visitors from all over the world, state Gov. Doug Ducey told EFE.

“As the first century after it was named a national park comes to an end, we should all admire its natural splendor and commit ourselves to preserving its magnificence for future generations,” Ducey said.

Its designation as a national park was largely done to protect the territory from the uncontrolled illegal mining so rampant in the region at that time.

The first civilization to settle by the Grand Canyon was the indigenous Pueblo people around the year 500. They grew grains, hunted animals of the region and established settlements in circular dwellings.

Repeated droughts drove away the Pueblo people, whose place was taken by the ancestors of the communities that currently live in that region like the Havasupai, Hualapai and Navajos.

In 1540 the Spaniard Garcia Lopez Cardenas, guided by the Hopi people, became the first European to see the Grand Canyon. He did it from the lookout point known today as Desert View.

“The Grand Canyon is a lesson in life – when you cast your eyes upon it for the first time you see the grandeur of this world and how small we humans are,” Pedro Berruecos Vila, representative of the Arizona Office of Tourism, told EFE

Known as one of the great symbols of Arizona, in 1979 the Grand Canyon was declared a World Heritage Site and one of the seven wonders of the natural world by the United Nations Educational, Scientific and Cultural Organization (UNESCO).

One of the accidents most often reported every year in Grand Canyon National Park refers to people bitten by squirrels, since despite the warnings, tourists insist on feeding those animals, Berruecos Vila said.

When the sun goes down, the Grand Canyon offers visitors the chance to admire the pure night sky without electric light pollution.