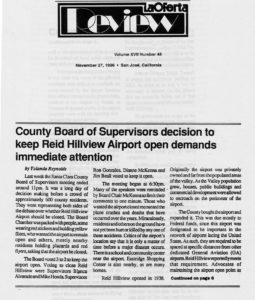 Last week the Santa Clara County Board of Supervisors meeting ended around 11pm. It was a long day of decision making before a crowd of approximately 600 county residents. They were representing both sides of the debate over whether Reid Hillview Airport should be closed. The Board

Chamber was packed with people, some wearing red stickers and holding yellow fliers who wanted the airport to remain open and others, mostly nearby residents holding placards and red ﬂyers, asking that the airport be closed.

The Board voted 3 to 2 to keep the airport open. Voting to close Reid Hillview were Supervisors Blanca Alvarado and Mike Honda. Supervisors Ron Gonzales, Dianne McKenna and Jim Beall voted to keep it open.

The meeting began at 6:30pm. Many of the speakers were reminded by Board Chair McKenna to limit their comments to one minute. Those who wanted the airport closed recounted the plane crashes and deaths that have occurred over the years. Miraculously, residents and others on the ground have not yet been hurt or killed by anyone of these accidents. Critics of the airport’s location say that it is only a matter of time before a mayor disaster occurs. There is a school and community center near the airport. Eastridge Shopping Center is also nearby, as are many homes.

Reid Hillview opened in 1938. Originally the airport was privately owned and far from the populated areas of the valley. As the Valley population grew, houses, public buildings and commercial development were allowed to encroach on the perimeter of the airport.

The County bought the airport and expanded it. This was due mostly to Federal funds, since this airport was designated to be important in the network of airports lacing the United States. As such, they are required to be spaced at speciﬁc distance: from other dedicated General Aviation (GA) airports. Reid Hillview reportedly meets that requirement. Advocates of maintaining the airport open point as well to the convenience of its location for hundreds of local small airplanes users and owners.

From the beginning of the evening it was clear that some of the affected residents were willing to overlook the noise caused by the airport because they either; learned to ﬂy planes there, worked at the airport or feared an increase in ground traffic if the airport property were sold for housing and commercial development.

Noise and fear of a crash and death in the community was clearly in the minds of many who testified. The speakers spoke passionately. 0ne person, who wanted the airport to remain, suggested that the noise and congestion that has occurred throughout the city was a major problem for everyone and she recommended a serious study to find ways to mitigate these irritants.

Just recently, researchers in Bogota, Colombia upon studying the noise and congestion of some of the world’s major cities concluded that residents of these cities were suffering signiﬁcant incidences of stress and mental disorders.

This writer lives near the San Jose International Airport. A number of years ago a plane crashed on my street. It was a terrible crash. Though there were people in each home along the street, not one resident was killed or physically injured. Many of the residents who were home that day have still not gotten over the intense fear and jangled nerves that surface every time a plane seems to be flying off course or too low.

As the Valley has grown so has the wealth of some of the residents, for whom private plane travel is often the preferred mode of travel. For them and San Jose officials maintaining Reid Hillview as a GA airport is crucial for the planned expansion of the San Jose International Airport (SJIA). The Mayor and City Council will soon be considering adoption of a Master Plan for the San Jose International airport.

Airport Director Ralph Tonseth is urging the maximum buildup of SJIA. In order to do that it will be necessary to remove the GA planes that are currently flying out of that airport to other county airports namely Reid Hillview.

To understand the scope of the proposed buildup of SJIA, it is noted that passenger count will increase from 9 million to 17.6 million. Since 1996 traffic at SJIA has doubled from 4.5 million passengers to 9 million with the attendant noise and air space congestion.

In 1964, only small, six passenger ﬂights ﬂew into and out of the San Jose airport. Former San Jose Planning Director Mike Antonacci has pointed out that the placement of the San Jose airport between San Jose and Santa Clara was one of the sorrows of his career. He explained to this writer that he strongly objected to building the airport where it is now. He explained that he anticipated that air travel would eventually be signiﬁcant and should he placed very far from residential zones. His cautions were disregarded by the then elected ofﬁcials and the consequences of those long ago decisions are causing many San Jose and City of Santa Clara residents (even those living miles from the airport) grief and torment.

Some opponents of the Reid Hillview airport state that its on the east side of San Jose and thereby a form of ‘environmental racism.’

A former member of the County Airport Commission, Berkeley Driesel, says that in his investigations of air travel conditions in the County, he discovered that, between the 1985 to 1995-time period, there have been 49 ‘near misses’ at SJIA. He explained that these figures are likely low since the data collection of these events is voluntary and not required by the FAA

(Federal Aviation Agency). Based on this information, he advocates keeping Reid Hillview open. Others argue that such information should result, not in expansion of any airport (Reid Hillview or SJIA), but rather that there should be a reduction of both take-off and landing at both of these airports. They argue that other airport sites should be found that will not pose a danger to the community.

Critics of the continued use of Reid Hillview point out that the costs of such a facility are borne by residents who do not beneﬁt front its presence. The City of San Jose must be careful in following its desire to grow that it does not subject its residents to such LULUs (locally undesirable land uses).

County Supervisor Blanca Alvarado pointed out that the residents living within the vicinity of Reid Hillview, “were hard working people and deserved a sense of safety, peace and quiet.” Indeed, many who spoke, including those who favored keeping Reid Hillview, recognized the value of the community. San Jose has been home to a diverse population ‘of good hard working people.’ Efforts to transform San Jose into a glamorous tinsel town have failed and will likely continue to fail. San Jose’s primary asset is its residents and their quality of life should not only be guarded but must be enhanced.

The complete shutdown of Reid Hillview would be costly. The only way that the County could afford to pay back the Federal Government would be by the sale of the land to developers. That precludes keeping the space open which currently provides space to over 400youths who practice and play sports league games on the edges of the 180-acre airport site.

According to a recent study of the Reid Hillview Airport there have been far more injury producing auto accidents than airplane accidents in the nearby vicinity. For both the SJIA and Reid Hillview those statistics will likely change. If all of the GA planes from SJIA move to Reid Hillview Airport they will not have a total of 209 planes but approximately 880 planes. If San Jose International doubles in size, air space in the Valley will be almost wall to wall planes. Instead of 49 ‘near misses’ the rate could more than double and fatalities could greatly increase. A major approach to the SJIA lies over the recently constructed San Jose Arena. The FAA warned against building an arena under the ﬂight path of large commercial planes. They warned that an accident was a very real possibility and, should such occur, it would be a “high impact incident.”

As population density increases in San Jose, the study of land use and its effect on the residents will be crucial. San Joseans must guard against allowing this city to become the site of preferences for undesirable land uses forbidden in the more affluent areas of the South Bay.

Supervisor Jim Beall stated that, in rejecting closure of the airport, he expected that Reid Hillview as an operation “had the obligation to be a good neighbor.” He added several recommendations. Among them that the county apply for funds to mitigate the homes affected by the impact of aircraft noise. He suggested rerouting the aircraft approach path in order to make it safer for planes to approach the airport. He also asked that the airport’s ‘touch and go’ landing space be relocated. Beall suggested the establishment of an airport curfew as was established for the SJIA.

Watchdogs of SJIA point out that although SJIA has a curfew, there are many violations. They add that, though these curfew ‘penetrations’ are often reported, not one ﬁne has been issued since the curfew was adopted. Often, the ofﬁcial excuse is that a body part was ﬂown in as an emergency. Less frequently the excuse is ‘bad weather.’ Other times the excuse has been that a sports “team has to leave and will not be spending the evening in San Jose.”

For more information on the Reid Hillview controversy contact your County Supervisor at 299-2323.

Community hearings on the expansion of the SJIA are scheduled for the James Lick High School multi-purpose room at 57 N. White Rd. on Monday, December 2 at 7:00p.m. Another meeting is scheduled for Bellarmine High School at 850 Elm Street for Monday. December 9 at 7:00pm. © La Oferta Newspaper.