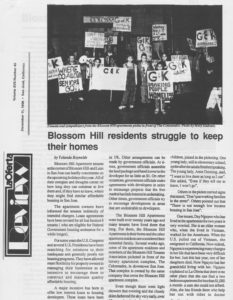 Blossom Hill Apartment tenants at the corner of Blossom Hill-and Lean in San Jose can hardly concentrate on the upcoming holidays this year. All of their energies and thoughts center on how long they can continue to live there and, if they have to leave, where they might ﬁnd similar affordable housing in San Jose.

The apartment owners have informed the tenants indirectly of intended changes. Lease agreements have been revised for all but Section 8 tenants (who are eligible for Federal Government housing assistance for a while longer).

For some years, the U.S. Congress and several U.S. Presidents have been searching for solutions to their inadequate and generally poorly run housing programs. They have allowed more flexibility for property owners in managing their businesses as an incentive to encourage them to construct and maintain quality affordable housing.

Even though there were light showers that evening and the cloudy skies darkened the sky very early, over 60 people, including numerous children, joined in the picketing. One young lady, still in elementary school, spoke after the adults finished speaking. The young lady, Anne Dunning, said, ‘‘I want to live there as long as I can.” She added. “Even if they tell me to leave, I won’t go.”

Others in the picket carried sign that stated, “Don’t put working families in the street.” Others pointed out that “There is not enough low income housing in San Jose.”

One tenant, Day Nguyen who has lived at the apartments for two years is very worried. She is an older woman who, when she lived in Vietnam, worked for the Americans. When the U.S. pulled out of Vietnam, she emigrated to California. Now retired, Nguyen is experiencing many changes in her life that have been very difﬁcult for her. Just this last year, one of her daughters died. Now Nguyen has her grandchild living with her. Nguyen explained to La Oferta that there is no other place that she can ﬁnd a two-bedroom apartment for less than $1,000 a month – a sum she could not afford. Also, she has friends there who help her out with rides to doctor appointments and to get groceries.

The tenants believe that Goodrich and Kest, a large real estate syndicate that own hundreds of rental properties (almost exclusively apartments across the nation) is being “unfair.”

After almost two hours of picketing, a spokesperson for Goodrich and Kest came down and invited a number of the tenants to a meeting so, he explained, that he could better understand their concerns.

The tenants, encouraged by the offer to air their concerns, joined the Goodrich &. Kest (G&K) spokesperson, Ancil Romero, in the recreation room on the top ﬂoor of the Colonnade apartment complex.

Of uppermost concern to the tenants was the decision to convert this much-needed low income housing to true market rate housing. Romero did not answer their question as to why G&K had explained rental conditions would change. Instead he explained that, because Congress had recently changed the law regarding debt retirement, the company now had an “option” to buy out its subsidized mortgage. To do so would relieve the company of the commitment it had made to provide its apartments to low income people. Even so, he indicated that very few tenants would be misplaced. They asked him for written assurances. Romero then agreed that he would speak to his boss and schedule a meeting between her and the tenants.

Reports are that G&K plans to convert other low income Santa Clara properties to market rate housing. One of these is the Central Park Apartments in Mountain View and another is the Lawrence Rd. apartments in Cupertino.

For many G&K tenants, rents are far more than they can afford. According to recent reports, the average rent in Santa Clara County for a one bedroom apartment is $731 monthly, for two bedrooms it is $931 a month and for three bedrooms almost $1240.

Though the Blossom Hill Apartments is home to some retired people, many, if not most, of the tenants work full time.

Though the numbers listed above indicate the average rent in the area, a handout advertising the newly completed Villa Torino apartments in downtown San Jose, lists a monthly rent rate for a one bedroom 786 sq. ft. in apartment in that complex as starting at $1450. A three-bedroom apartment rents for $1,995 a month. To qualify for tenancy, the renter must prove an income at least 2 ½ times the monthly rent. Lease agreements range from 6 months to one year and security deposits begin at $350 for a one bedroom apartment. According to a Redevelopment Agency report of November 7, Villa Torino received Agency funding amounting to $1,218 million dollars. Villa Torino is bounded by North First Street, Julian, Market and Bassett streets.

It is the prospect of facing such an expensive housing market that strikes fear in the hearts of low income working people and others on ﬁxed incomes. Almost as distressing is the added reality that what is now a close knit neighborhood community will no longer exist. 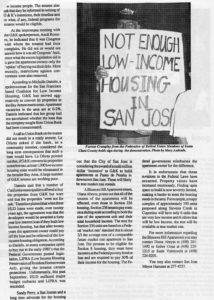 The Blossom Hill Tenants Association have requested a meeting with G&K. They have a list of demands. These include that G&K keep these apartments as low income and that other properties owned by G&K also be retained as low income. The tenants ask that if G&K wants to pay off its debt, that it sell its properties to a non proﬁt or tenant based organization that will keep these apartments available to low income people. The tenants also ask that they be informed in writing of G&K’s intentions. their timeline and or what, if any, federal programs the tenants would be eligible.

At the impromptu meeting with the G&K spokesperson, Ancil Romero he indicated that it was Congress with whom the tenants had their complaint. He did not or would not answer how it was all Congress’ fault, since what the recent legislation did is it gave the apartment owners only the ‘option’ of buying out their debt. More recently, restrictions against conversions were also removed.

According to Michelle Daniels, a spokeswoman for the San Francisco based Coalition for Low Income Housing, G&K has moved aggressively to convert its properties in the Bay Area to market rate. Apartment vacancies in the area are at 0-2%. Daniels indicated that her group had not ascertained whether the loan that the company sought from Union Bank had been consummated.

A call to Union Bank on the matter did not result in a ready answer. La Oferta asked if the bank, as a community member, considered the long-term consequences that such a loan would have. La Oferta pointed out that, if G&K converts its properties to market rate at least 1,000 low income housing units would be eliminated in the broader Bay Area. A large number of G&K tenants are working poor.

Daniels said that a number of California municipalities offered to buy the properties from G&K but were told that the properties ‘were not for sale.’ Daniels explained that when these HUD loans were made, over twenty years ago, the agreement was that the developers would be awarded a forty-year low interest loan if they built low income housing, but that after twenty years the apartment owner could pay off the loan and be relieved of the low income housing obligation. According to Daniels, so many companies opted to buy out in the early 1980’s that the Federal Government passed legislation. LIPRA (Low Income Housing Preservation of Resident Homeowners Act), was giving the tenants certain protections. Unfortunately, this past September, HUD suffered major budget cutbacks and LIPRA was rescinded.

Sandy Perry a San Josean and a long-time advocate for the housing needs of low income families, point out that the City of San Jose is considering the award of a multi-million dollar ‘incentive’ to G&K to build apartments at Paseo de Peralta in downtown San Jose. These will likely be true market rate rentals.

A Blossom Hill Apartment tenant, Diana Abeyta, points out that all of the tenants of the apartments will be affected, even those in Section 236 housing. Section 236 tenants pay rents on a sliding scale according to both the size of the apartment unit and their total household income. The rent for Section 236 units are based on a Federal ‘market rate standard that is about 73 the average cost of a comparable future market rate apartment in San Jose. For persons to be eligible for Section 8 housing, they must have incomes at the Federal poverty level or less and are required to pay 30% of their income for the housing. The federal government reimburses the apartment owner for the difference.

It is unfortunate that these revisions to the Federal laws have occurred. Property values have increased enormously. Finding open space to build is now severely limited, making it harder to meet the housing needs in the area. For example, a major complex of approximately 190 units proposed along Stevens Creek in Cupertino will have only 6 units that are very low income and 6 others that will be low income. the rest will be available at true market rate.

Next article - Events Around the Bay »