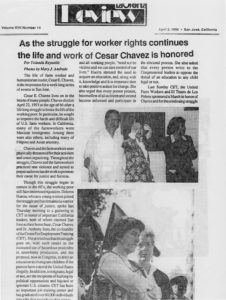 The life of farm worker and humanitarian leader, César E. Chávez,is the inspiration for a week-long series of events in San José.

César E. Chávez lives on in the hearts of many people. Chávez died on April 22,1993 at the age of 66 after a lifelong struggle to better the life of the working poor, in particular, he sought to improve the harsh and difﬁcult life of U.S. farm workers. In California, many of the farm workers were Mexican immigrants. Among them were also others, including many of Filipino and Asian ancestry. 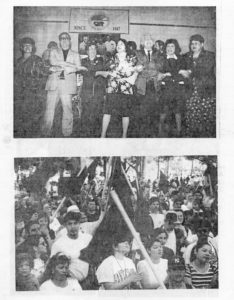 Though this struggle began in earnest in the 60’s, the working poor still face enormous injustices. Dolores Huerta, who as a young woman joined the struggle and has remained a warrior for the cause of justice, spoke last Thursday morning to a gathering at CET in honor of important California leaders, both of whom claimed San José as their home base, César Chávez and Dr. Anthony Soto, the co-founder of the Center For Employment Training (CET). She pointed out that the struggle goes on, with such issues as the increased use of hazardous pesticides in strawberry production, and the proposal, now in Congress, to deny and education to immigrant children if the parents have entered the United States illegally. In addition, immigrants, legal or not, are the recipients of bashing by political opportunists and bigoted or ignorant U.S. citizens. CET has been an important job training center and has graduated over 60,000 individuals into jobs that provide livable wages.

Huerta pointed out that Latinos and all working people, “need not be victims and we can take control of our lives.” Huerta stressed the need to acquire an education, and, along with it, knowledge and it is important then to take positive action for change. She also urged that every person present, become first of all a citizen and second become informed and participate in the electoral process. She also asked that every person write to the Congressional leaders to oppose the denial of an education to any child legal or not. 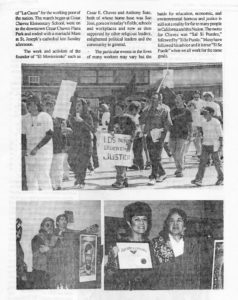 Last Sunday CET, the United Farm Workers and El Teatro de Los Pobres sponsored a March in honor of Chávez and for the continuing struggle of “La Causa” for the working poor of the nation. The march began at César Chávez Elementary School, went on to the downtown César Chávez Plaza Park and ended with a mariachi Mass at St. Joseph’s cathedral late Sunday afternoon.

The work and activism of the founder of “El Movimiento” such as César E. Chávez and Anthony Soto, both of whose home base was San José, goes on in today’s ﬁelds, schools and workplaces and now as then supported by other religious leaders, enlightened political leaders and the community in general.

The particular events in the lives of many workers may vary but the battle for education, economic, and environmental fairness and justice is still not a reality for far to many people – in California and this Nation. The motto for Chavez was “Sal Si Puedes,” followed by “Sí Se Puede.” Many have followed his advice and it is true “Sí Se Puede” when we all work for the same goals. © La Oferta Newspaper.