New York, Apr 3 (EFE).- A building on wheels called “The Shed,” the latest novelty in New York, is the home of an art institute into which $500 million has been invested and with which the city intends to remain in the vanguard of culture.

Designed to host all kinds of events such as concerts, plays, exhibitions and conferences on its eight floors and its 18,500 sq. meters (198,871 sq. feet) of floor space, The Shed has presented itself to the world as a venue that will welcome a new generation of artists from all fields.

The architects opted for an innovative approach and placed part of the building on giant railway wheels that allow it to move and create a multifunctional space, expanding or contracting itself depending on the circumstance. 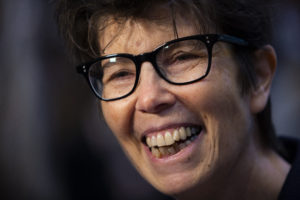 The building is a huge “shell” that measures 37 meters (121 feet) high, made with translucent materials in silvery colors that cover part of the construction like a wrapper protecting its fragile contents.

The Shed’s chief architect, Elizabeth Diller, said that the building sits on six axles with eight railway wheels almost two meters in diameter that allow the structure to move forward and double the size of its main area called “The McCourt.”

The McCourt, named after entrepreneur Frank McCourt who donated $45 million to the project, can extend to 1,600 sq. meters (17,000 sq, feet) of soundproof climate-controlled space with a total capacity for 1,250 people seated or 2,000 standing.

The deck moves on rails, a detail that pays homage to the location’s history as an old trainyard, which was radically transformed this year to become one of Manhattan’s attractions.

The new building requires 12 motors that together have just 180 horsepower – a Toyota Prius has a 134-horsepower engine – and it can be fully deployed in five minutes, according to the institution.

The Shed is the latest building in the colossal Hudson Yards real estate project, described as the “new neighborhood” to the west of Manhattan, which includes a shopping mall of 90,000 sq. meters (970,000 sq. feet), six skyscrapers, a school and several landscaped areas.

On Friday, The Shed will kick off its program with a five-night “Soundtrack of America” concert series, an event created by British film director Steve McQueen, to celebrate the impact and history of African-American music in the United States.