Miami Beach, Apr 9 (EFE).- The cruise ship sector is going through one of its best periods in its history and is forecasting a record 30 million passengers in 2019, CEOs of the major industry players said here Tuesday.

It is not surprising that the top executives at the annual conference on the global state of their industry expressed optimism and confidence at the Seatrade Cruise Global event in Miami Beach. 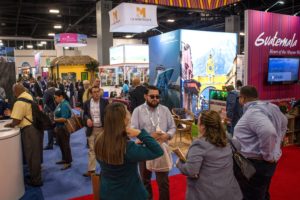 Dozens of people attend the opening of ‘Seatrade Cruise Global’, in the Convention Center of Miami Beach, USA, 09 April 2019. The cruise industry lives one of the best periods of its history, more ‘sexy’ and ‘global’ than ever, ‘highly diversified and innovative’ and with a record forecast of 30 million passengers by 2019, coincided on Tuesday four executive presidents of the sector. EFE/ Giorgio Viera

In 2018, the sector had an economic impact of some $138 billion, according to Kelly Craighead, the president of the Cruise Lines International Association (Clia), the entity that groups the main cruise companies.

The growth challenge will be responded to by the oceangoing cruise industry with the launching this year of 18 new cruise ships and plans for “technological innovation,” said Richard Fain, the chairman and CEO of Royal Caribbean Cruises Ltd.

Part of the sector’s success at achieving accelerated and ongoing growth is the result of the “highly diversified industry,” he said.

In that context, he added, the essential elements do not lie in cosmetic changes such as the colors and sizes of cruise ships, but rather in “providing new experiences” for passengers.

Arnold Donald, the president and CEO of Carnival Corporation, said that his company is pursuing technological applications to reduce the consumption of fuel and further protect the marine environment.

Along those lines, Craighead said that the sector’s aim for 2030 is to reduce by 40 percent its emission of greenhouse gases.

Pierfrancesco Vago, the executive chairman of MSC Cruises, which in 2016 launched a 10-year plan including investments of 13.6 billion euros ($15.23 billion) in the building of 17 new vessels, emphasized the value to his firm of “word of mouth” among cruise passengers and potential passengers.

Vago said he was satisfied with the 6.5 million passengers his cruise ships hosted in 2017 and was especially enthusiastic with the new investments the company was making and in the future of the sector.

The Italian executive noted that the cruise sector is becoming more and more of a global business that is feeling the impulse to explore new destinations such as Antarctica or enhance those available in China and India.

Meanwhile, Frank Del Rio, president and CEO of Norwegian Cruise Line Holdings Ltd., said that all the signs indicate that, although the current cruise fleet includes vessels of all sizes, the trend is toward ever larger ships.