Directly or indirectly ‘welfare reform’ will affect everyone in the county 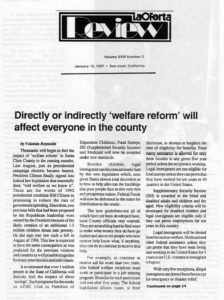 Thousands will begin to feel the impact of ‘welfare reform’ in Santa Clara County in the coming months. Last August, just as presidential campaign rhetoric became heated, President Clinton ﬁnally signed into federal law legislation that essentially does, “end welfare as we know it.” These are the words of 1992 presidential candidate Bill Clinton in promising to reduce the rate of government spending. Since then, two previous bills that had been proposed by the Republican leadership were vetoed by the President because of the likely creation of an additional 1.5 million children thrust into poverty. He did sign into law such a bill in August of 1996. This law is expected to have the same consequence as was predicted for the previous versions and contains as well possible tragedies for many poor families and individuals.

It is estimated that over 1 million people in the State of California will directly feel the impact of these ‘savings.’ Such programs for the needy as AFDC (Aid to Families of Dependent Children), Food Stamps, SSI (Supplemental Security Income) and Medicaid will now be awarded under new standards.

Besides children, legal immigrants can become seriously hurt by this new legislation which, now gives States almost total discretion as to how to help alleviate the hardships that poor people face in this very rich and prosperous nation. Federal Funds will now be disbursed to the states for distribution to the needy.

The new guidelines-not all of which have yet been developed have, local County ofﬁcials very worried. They are scrambling hard to ﬁnd ways to make what money they do have go further and also to let people who now receive help know what, if anything, they can do to continue to receive that help.

For example, to continue to receive aid for more than two years, able bodied welfare recipients must work or participate in a job training program. Beneﬁts for each participant will end after five years. The federal legislation allows states, at their discretion, to shorten or lengthen the time of eligibility for beneﬁts. Food stamp assistance is allowed for only three months in any given ﬁve year period unless the recipient is working. Legal immigrants are not eligible for food stamps unless they can prove that they have worked for ten years or 40 quarters in the United States.

Supplementary Security Income (SSI) is awarded to the blind and disabled adults and children and the aged. New eligibility criteria will be developed for disabled children and legal immigrants are eligible only if they can prove employment for ten years in this country.

Legal immigrants will be denied beneﬁts such as welfare, Medicaid and other federal assistance unless they can probe that they have been living and working in the United States for 5 years or are U.S. veterans or immigrant refugees.

With very few exceptions, illegal immigrants are denied beneﬁts except for emergency or disaster relief.

In Santa Clara County, there are approximately 140.000 participants in the various programs available to poor and needy. The actual number of individuals involved is smaller since some people receive assistance in more than one program.

For example, since 1996, the GAIN (Greater Avenues for Independence) program provided comprehensive employment services to 6,396 adults whose children receive AFDC. Another 9,000 are on the waiting list for this program. The GAIN program is designed to help unemployed adults whose children are recipients of AFDC make the transition from welfare to work.

Medi-Cal is provided to approximately 66,000 Santa Clara residents. Of these 49% are U.S. citizens. In August of 1996, 16,261 persons received food stamps. Sadly, even though the unemployment rate has declined in the Valley, a County report indicates that the number of Food Stamp recipients continues to rise, indicating the necessity for many “to supplement their income with food Stamps in order to cover food expenses.” In contrast, the number of AFDC recipients did go down in the County as unemployment decreased.

Another large program is SSI which serves approximately 40,000 adults and children. Of this group, 56% were 65 or over and 53% were disabled. Ninety eight percent of the children on SSI were disabled. 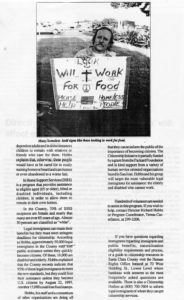 Though a majority of AFDC recipients (56%) received aid for less than five years (75% are U.S. citizens and English is the primary language of 60% of the recipients) the remaining 44 percent of the recipients continued to receive aid for five or more years. The stated objective of many of the policy makers in Washington and Sacramento is to get “idle people to work

and accept responsibility.” Analysis of County welfare recipients indicates that here as in other parts of the country, the majority of welfare recipients do work if they can ﬁnd work. There is a certain percentage who, for lack of marketable skills, age disability or dependents can-not work or, if they do, can-not make ends meet and continue to need help.

A San Francisco Chronicle article by Elliot Diringer entitled “Welfare Warfare,” quotes human services specialist, Michael Wald as saying” It would take a lot of thought and commitment (to run a decent program if it chooses to spend the money) because the bottom 30 percent, maybe 40 percent, are going to be very, very, very hard to get jobs for.” Wald adds, “The first couple of years could go smoothly—about three years out. We’ll see who we are left with and just how bad the damage is.

Santa Clara County Supervisor Jim Beall says, “There is good and bad in the Governor’s proposed 1997-98 budget. It does provide ﬂexibility (to the County in administering Welfare programs) but we didn’t get sufficient funds for job training and child care.” “It is one thing to get people off of welfare but it is another to get them jobs.” The Governor’s budget would only provide the County enough money to train 1500 people in the GAIN program and there are currently over 9,000 people on the waiting list. Supervisor Beall estimates that the county will have to create 15,000-20,000 new jobs to meet the needs for these additional workers.

San Josean Richard Hobbs, now Director of the Citizenship & Immigration Program in the Office of Human Relations, says, “there will be people who will drop off of SSI. He adds, “we will see horror stories beginning in the summer.”

Hobbs explained that many SSI recipients are very frail and elderly. That assistance, plus their eligibility, in severe cases, for “in home support services” has enabled these very dependent adults and in some instances children to remain with relatives or friends who care for them. Hobbs explains that, otherwise, these people would have to be cared for in costly nursing homes or board and care homes or even abandoned to a worse fate.

In Home Support Services (IHSS) is a program that provides assistance to eligible aged (65 or older), blind or disabled individuals, including children, in order to allow them to remain in their own homes.

In the County, 70% of IHSS recipients are female and nearly that many are over 65 years of age. Almost 50 percent are classiﬁed as “white.”

Legal immigrants can retain their beneﬁts but they must meet stringent deadlines for citizenship. According to Hobbs, approximately 50,000 legal immigrants in the County may lose public assistance unless they quickly become citizens. Of these, 16,000 are disabled and elderly. Hobbs explained that the County records indicate that 95% of these legal immigrants do meet the new standards, but they could lose their assistance unless they become US. citizens by August 22, 1997. Another 15,000 could lose food stamps.

Hobbs, his staff and a consortium of other organizations are doing all that they can to inform the public of the importance of becoming citizens. The Citizenship Initiative is partially funded by a grant from the Packard Foundation and in kind support front a variety of human service oriented organizations based in San Jose. Hobbs and his group will target the most vulnerable legal immigrants for assistance: the elderly and disabled who cannot work.

Hundreds of volunteers are needed to assist in this program. If you wish to help, contact Director Richard Hobbs or Program Coordinator, Teresa Castellanos, at 299-2206.

If you have questions regarding immigrants regarding immigrants and public benefits, naturalization eligibility requirements and process, or a guide to citizenship resources in Santa Clara County visit the Human Rights Office located at 70 West Hedding St., Lower Level where handouts with answers to the most frequently asked questions are available. There is also 3 Citizenship Hotline at (800) 700-7604 to inform legal immigrants of where they can get citizenship services. © La Oferta Newspaper.

Next article - Cuba publishes new Constitution at time of crisis »