Tegucigalpa, Apr 10 (EFE).- Hundreds of Hondurans have set off in recent hours from the northwestern city of San Pedro Sula in a new caravan bound for the United States.

Two groups departed from the main bus station in that Central American country’s second city, with the first consisting of around 100 men, women and children and leaving late Tuesday night and the second beginning their journey between 5 am and 6 am on Wednesday.

“I’m going with some cousins and friends. There are 15 of us. We hope to reach the United States,” one of the migrants, 23-year-old Luis Antonio Alvarez, told EFE. 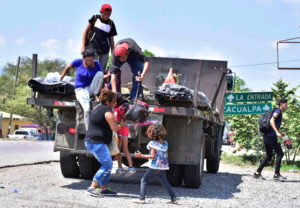 A group of Honduran citizens get off a truck to continue on their way to Agua Caliete in Guatemala, at the community of Virrey, department of Santa Barbara, Honduras, 10 April 2019. Hundreds of Hondurans began a new caravan citing lack of employment and insecurity in their country.

He said that he had made an earlier attempt to reach the US last October as part of a caravan of more than 1,000 people and that he was trying again because “it’s difficult to find work here.”

Alvarez said that he hails from Tegucigalpa and that he hopes to be reunited in the US with his wife and five-year-old daughter, who he said “went with a coyote (people-smuggler).”

“They’re already there. I hope to make it so we’re together again,” Alvarez said, without offering details about his wife and daughter.

He added that he doesn’t fear a journey fraught with danger, especially in Mexico, where many migrants fall victim to extortion and kidnapping rackets run by organized-crime gangs.

Alvarez said the key to avoiding problems in Mexico is to mind his own business, adding that “Mexicans like to be treated well and for their laws not to be disrespected.”

He added that he and his family and friends, all from Tegucigalpa, have “very little money, just enough for the bus” journey from San Pedro Sula to the Agua Caliente sector of the western province of Ocotepeque, which borders Guatemala.

Other male and female migrants approached by EFE did not identify themselves and said only that they are leaving Honduras because they cannot find work in their homeland. 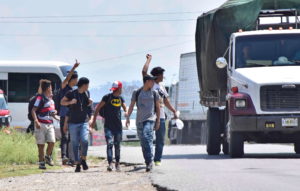 A group of Honduran citizens ask a truck for help to continue on their way to Agua Caliete in Guatemala, at the community of Virrey, department of Santa Barbara, Honduras, 10 April 2019. Hundreds of Hondurans began a new caravan citing lack of employment and insecurity in their country.

Some migrants in the caravan said they hailed from communities in the northwestern Honduran provinces of Cortes, Yoro and Santa Barbara.
Messages posted to social media on Tuesday indicated that the group departing on Wednesday would be made up of at least 500 people.

After an initial migrant caravan was organized in October 2018, Honduran authorities launched a campaign warning would-be undocumented migrants of the dangers they could face at the hands of criminal gangs and people smugglers.

Migrants also are told that the US will not grant them asylum and that it is not true that they will be allowed entry if they are accompanied by minors.

Large-scale migration from Honduras is a phenomenon that dates back many years.

According to human rights organizations, roughly 100-150 people leave that Central American country every day in a bid to reach the US.

Caravans began to be used late last year to provide security in numbers.

But many migrants who set off in caravans either in October or January were unable to reach their destination and were sent back to their homelands via bus or plane.