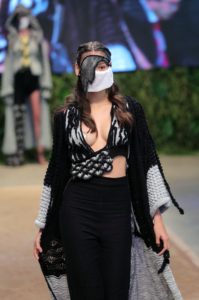 Lima, Apr 13 (EFE).- A number of young Peruvian designers have taken on the challenge of creating their own collections using organic cotton and other natural materials like alpaca as part of a new generation that is leading the trend to sustainable fashion worldwide.

For the past 15 years, the Young Fashion Designers contest has honored with internships and studies abroad the most creative Peruvian designers.

This year’s contest, organized as part of the Peru Moda 2019 fashion fair, required participants to “rethink,” since design is turning to natural fibers native to Peru – pima cotton and alpaca – to create sustainable organic apparel.

The seven finalists of the contest each exhibited four items of clothing on the runway at the Lima Convention Center, notable among which were textiles of alpaca, crocheted or macrame decorations and accessories, artisan felt and cotton cloths in natural colors.

The Reimagina (Reimagine) collection by Diego Flores Nazario included an outfit with a jacket featuring detachable long flared sleeves, and another three items including an eye-catching short coat with tattered holes and loose threads.

The other two creations were a skirt and a form-fitting dress made of alpaca wool with short and long jackets to choose from.

Flores graduated in 2012 from the Fashion and Design School (MAD) and two years later won the Flashmode contest in Lima with a romantic collection dedicated to the women in his life, after which he concentrated on developing a fashion brand for a retail outlet. 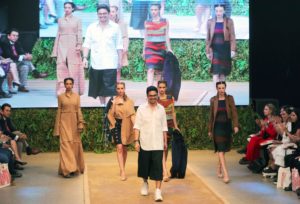 The Reimagina collection “is basically inspired by rethinking existing processes, in making apparel that is much more utilitarian and able to be repaired instead of just being thrown out,” Flores told EFE.

“I think people should think a little more about buying better” and “buying things that last,” he said.

The jury picked Flores as this year’s winner and awarded him a full scholarship to the European Design Institute in Italy, an internship in China, a ticket to Italy and a degree in brand development from the Pontifical Catholic University of Peru.

Surrounded by friends and family on the runway, Flores said winning came as “a surprise” because he always tried to keep his expectations below his excitement level, which is why it all seemed so “unbelievable.”

“One reason I didn’t want to get too excited about the prize is because we are an incredible group,” he added and recalled the other praiseworthy participants: Anggela David, Elsbeth Cardenas, Paula Ramirez, Tatiana Sullcaray, Tomas Revilla and Yaid Zamudio.

Tatiana Sullcaray, for example, was inspired by the oil spills in the Amazon to present a collection in which layers of felt cloth in black, gray and white represent the pollution suffered by some indigenous communities in the jungle.

Another participant, Yaid Zamudio, presented an avant-garde collection called Act, in which each item of apparel has big sleeves of netting simulating trash bags made with scraps of alpaca and cotton.