Santiago, Apr 15 (EFE).- A vegetarian sausage made basically from quinoa has been developed on the Valparaiso coast to diminish the effects of the drought that has affected central Chile for several years, since the grain takes very little water to grow.

The Regional Center for Health Foods Research (CREAS) has transformed this Andean grain into a sausage in order to enlarge the market for the quinoa grown in a region suffering from the water crisis, while also creating a healthy alternative to meat.

This grain has a strong “commercial and nutritional” potential, but the “farmers lack the tools for its correct processing and marketing,” CREAS manager Alejandro Osses said.

Development of the sausage was done on the basis of this grain, which, after being boiled, “is ground and enriched with legumes, starches and vegetable oil. It is then seasoned to give it the taste of a conventional frankfurter,” Eduardo Caballero, the CREAS researcher in charge of the project, said.

The consumption of such meat is very high in Chile since it is one of the country’s most popular dishes: the “complete” meal, a version of the hot dog, which besides the sausage comes with tomato, avocado, sauerkraut and mayonnaise. 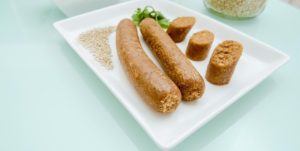 Chileans in general eat a lot of hot dogs as fast foods, whether of chicken, turkey or beef, and the quinoa sausge will undoubtedly expand the range of these products, particularly among those who don’t eat meat.

CREAS developed this vegetarian product not only as a “healthy” substitute for meat, but largely because its crops need “very little water.”

“The big plantations have shrunk the water supply in the valley. We previously pumped it from a depth of 15 meters (50 feet) but now it’s 100 meters down and none of us has the funds to pay for finding it at those depths,” Luis Soto, a local quinoa farmer, said.

Growing this grain requires irrigation only twice during the four months it takes the seeds to ripen, while avocadoes take eight months and “almost 200 liters (53 gallons) of water,” Soto said.

Though Soto did not say so, at several places in the country’s central region, according to the farmers themselves, growing avocadoes has caused drought in the areas around where these fruit trees are grown because of all the water they use.

For that reason, the Valparaiso regional government has created a project to strengthen the processing and development of products based on quinoa.

The purpose of this project was twofold: to train regional farmers and to raise awareness among senior citizens about the benefits of this grain.
Quinoa can be a substitute for people who do not eat or avoid meat and are looking for “healthy” products, as is the case among “elderly adults, pregnant women and vegans,” Caballero said.

This vegetarian sausage is one of the edibles developed by CREAS, a private non-profit corporation, which has created some 60 products, from bean brownies to seaweed nuggets to paté and yogurt also made from quinoa.

Compared with most other grains, experts say, quinoa contains much more in the way of proteins and fats, though the latter are mostly unsaturated, with a notable presence of Omega 6 and Omega 3 acids.