New York, Apr 15 (EFE).- The unmistakable silhouettes of the skyscrapers of New York are part of the artistic project that the Metropolitan Museum of Art presents each spring, with the work of Polish-born German artist Alicja Kwade being highlighted this year.

Kwade, who is exhibiting her work for the first time in a US museum, has designed for The Met’s iconic open-air rooftop garden space, surrounded by Central Park and with views of the Manhattan skyline in the background, an abstract sculpture that combines huge metallic rectangles with imposing stone spheres representing the universe.

In this seventh edition of The Met’s yearly rooftop exhibit, taking advantage of the good weather the city generally enjoys between April and October, the artist wanted to make the public reflect on the weather, perception and science at the same time that they question the capitalist system that dominates the world.

“In this piece, from different points of view, one can appreciate how the planets fix themselves above the skyscrapers. The different worlds fix themselves on the pedestals of capitalism, which is what keeps the world turning, at least at present,” the 40-year-old Kwade told EFE during the presentation of her work.

Titled “ParaPivot,” the artist wanted for each of the pieces in the work to clearly represent several of the elements that make up the universe. 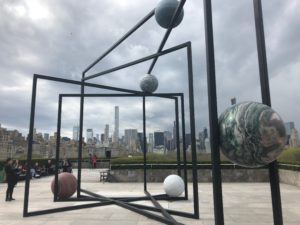 In one portion, the work presents the system that humanity has managed to construct, symbolized not only by the skyscrapers of the Big Apple in the background but also by the combination of different angles in the metallic framework, which in turn are a nod to New York’s quadrilateral urban design.

Another portion of the work – the spheres – represent the universe and the constant rotation of the planets and the human being, which, regardless of different scenarios and epochs, ultimately turn on the same desires and aims.

“I hope that the work impresses people at first glance and that it reminds them of a solar system, which will make them feel very small but at the same time very big,” Kwade, whose work will be on display from April 16 through Oct. 27, said.

Museum director Max Hollein praised the ability of the artist to use her work to connect with the public on several levels, both physical and mental.

“After having seen her work at several expositions … I have always admired her ability to create pieces that express themselves very precisely, but at the same time suggest so much uncertainty,” said Hollein at the presentation ceremony.

He added that the rooftop setting “presents a compelling site for Kwade, whose works offer an expansive view of the history of art and science.”

Meanwhile, Sheena Wagstaff, the director of Modern and Contemporary Art at The Met, added that “Kwade’s sculptural constellation playfully frames the jagged skyline of the city while cleverly provoking us at the same time to think about how we understand the universe out there, beyond the sky over The Met’s roof.”

The rooftop garden setting provides a significant contrast to a large portion of The Met’s permanent collection, which includes a tremendously diverse group of ancient and classical art.

Kwade, who lives in Berlin, said Monday that she feels very honored to be able to exhibit her work at The Met, which she described as one of her key objectives in life, but she said that she does not consider New York to be the center of the cultural world, noting that “For many artists, it’s not so important where you are because you can travel anywhere. There are so many things happening on the Internet … that it’s not so necessary to physically be at a site.”