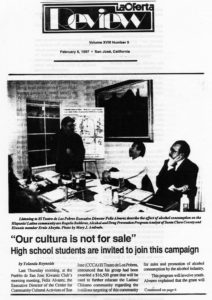 Last Thursday morning, at the Pueblo de San Jose Kiwanis Club’s morning meeting, Felix Alvarez, the Executive Director of the Center for Community Cultural Activism of San Jose (CCCA) El Teatro de los Pobres announced that his group had been awarded a $16,500 grant that will be used to further educate the Latino/Chicano community regarding the insidious targeting of this community for sales and promotion of alcohol consumption by the alcohol industry.

This program will involve youth, Alvarez explained that the grant will make possible a poster contest. El Teatro leaders will select those students whose artwork best illustrates the use of Latino, primarily Mexican celebrations and traditions, by the alcohol industry in order to promote alcohol consumption.

Alvarez and his group have long opposed this practice of promoting liquor consumption in the Latino/Hispanic community. In the past, el Teatro de Los Pobres has performed “La Borrachera,” a play that depicts the effects of alcohol on the family and the community, at small and large gatherings in schools, churches and in the neighborhood.

This grant will allow a broader campaign and directly involve the youth. According to Alvarez, the poster competition will be open to high school students currently attending the San Jose Unified School District or the East Side Uniﬁed High School District. The theme of the poster contest will be, “Our Cultura is Not For Sale.” The poster contest began on January 1, 1997 with a deadline of artwork to be submitted between the hours of 12 noon and 8 p.m. on Friday, March 21,1997.

According to Alvarez, the first-place poster will be reproduced and showcased on the sides of selected County transit buses as a part of a city-wide promotion campaign for the “Alcohol Free Campaign” of El Teatro de Los Pobres. The poster will be seen for at least 2 months if not longer.

Along with the poster campaign, CCCA is promoting a personal pledge to refrain from buying or consuming alcohol during the three-day weekend celebration of Cinco de Mayo.

Alvarez explains that the intent of these efforts to inform and involve the community and to help the community regain control over “our cultural celebrations and to halt the proliferation of liquor outlets in a community already saturated with alcohol outlets.”

Several years ago, Alvarez and his group surveyed the number of liquor outlets of just one area of San Jose a one mile radius circle around of the corner of Alum Rock and King Road, and found that, within this area, there are 125 liquor outlets, including sales by a hardware store and a bakery.

This inordinate proliferation of liquor outlets was made even more striking with the possibility that the City of San Jose would allow the sale of alcohol in the soon to be constructed Mexican Heritage Park and Gardens, which is intended to serve as a cultural center to the very large Hispanic/Latino community of San Jose.

According to an article in a 1989 issue of Prevention, regarding a report by Santa Clara County Bureau of Alcoholism Services, it was found that Spanish speaking men die from alcohol related causes at higher rates than other males in California. This report also indicated that the “drunk driving arrest rate was 33% higher for them than for others and that half of the Spanish speaking youths committed to the California Youth Authority were using alcohol before or during the offense for which they were arrested.” According to health data, chronic liver disease and cirrhosis of the liver is the sixth leading cause of death among Latinos. Cirrhosis is the ninth leading cause of death in general U.S. population. These sad facts are not unique to Latinos in San Jose but are duplicated in other large and recent immigrant Latino/Hispanic communities.

Since the high numbers of obvious alcohol related incidents have not been the norm in the ancestral home lands of these Hispanic/Latino populations, researchers have looked at other inﬂuences for these disproportionate ﬁgures.

According to the health professionals, much of the fault lies with the deliberate targeting of the Latino community for alcohol consumption by the liquor industry. According to the above article in Prevention, it was first noted by a 1985 liquor industry publication that, to counter lagging liquor sales, a rescue could be affected by “making a pitch for new liquor sales in the Hispanic market.” According to observers, “not long after this, commercials in Spanish, pushing hard liquor began to appear on television stations in Los Angeles, Miami and New York.”

In communities with large Hispanic/Latino populations, such cultural events as Cinco de Mayo, 16 de Septiembre, and other events, including educational, conferences, sporting events and educational scholarships, began to be sponsored by liquor and tobacco companies. Not only did they sponsor the activities, but they provided free cigarettes and almost free beer or other alcoholic beverages to the event’s participants.

Alvarez points to a recent promotional, in which a popular Mexican boxer, Julio César Chávez, appeared in San Jose under the Sponsorship of Coor’s beer. The cooperating nonproﬁt agency at that event was the Center for Training Careers (CTC), which was promised a 5-10 cent donation for every case of beer that was purchased during the two months promotional. This, Alvarez says is a disgusting promotion, “based on the consumption of alcohol.”

The Hispanic market is now sought after with even greater enthusiasm and the Hispanic/Latino consumer must become even more wary of clever marketing ploys since many of these products are neither healthy or worth their cost.

Alvarez explains that he and his group hope to achieve such awareness in the Latino/Hispano community and to as well engage others who are concerned with alcohol related problems in the Latino community to become involved in the effort to educate the community regarding this deliberate exploitation of the community’s celebration and traditions. In other words, end the use of its culture for the sale of products that are very harmful and destructive as well to the entire community.

He adds, “our campaign will focus on the moral and ethical reconsideration of the acceptance of alcohol sponsorship of bilingual ads and promotions and the consequent silence that has emerged with this relationship.”

For more information on the poster contest you may contact Felix Alvarez (el Teatro de los Pobres) at 254-3878, or stop by their office located at the Hispanic University, 14271 Story Rd. in San Jose. © La Oferta Newspaper.