The devilish rag doll in Mexico’s archives, a history of love and madness

Mexico City, Apr 14 (EFE).- Mexico’s General Archive of the Nation (AGN) safeguards incredible stories such as that of the rag doll from the 18th century that belonged to Francisco Xavier Palacios, a man who, out of love, entered religious life but ended up selling his soul to the devil.

Along with the doll, the AGN also holds the report the Mexican Inquisition drafted when Francisco denounced himself for heresy.

The correspondence he maintained with his lover Josefa Sosa, who made the doll so that he would remember her, was discussed with EFE by historian and head of the AGN educational department Alejandro de Avila.

The Mexican Inquisition was established in 1569 by Phillip II of Spain and was an office charged with pursuing and punishing actions contrary to the Catholic faith.

In this case, it was not necessary to prosecute Francisco because in 1782 he said he wanted to cooperate with that institution, which left his written testimony at the Santo Domingo convent in the city of Oaxaca, as well as the records of the investigation conducted by the official in charge of the case.

The story began when Francisco was about 15 and met Josefa Sosa, who was twice his age, establishing a motherly-sisterly relationship with her, given that he had lost his own mother and his father treated him badly. 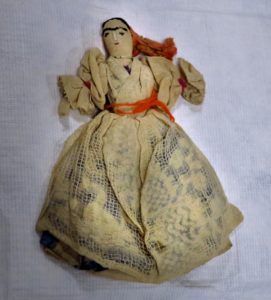 It was Josefa who asked Fransisco, taking advantage of the fact that he sang in the parish’s choir, to enter religious life so he could maintain a secret and prohibited relationship with her since, aside from their difference in age, she was married.

Although the young man agreed, he soon noticed that he was not cut out for religious life, which included chastity, shutting himself off from the outside world and spending 24 hours a day in the service of God.

That was when – in the face of his lover’s refusal to let him leave the convent – he began to have problems with his colleagues and to blaspheme on a daily basis.

Such was the hatred Francisco developed for his environment and for the limits placed on him there that he even tried to kill himself twice and, after fruitlessly trying everything he could to change his situation, he began to call on the devil to help him.

One day, when he had given himself up for lost, the story goes that a man introducing himself as the devil himself appeared in his cell asking him to fulfill his promise.

Francisco offered his soul in exchange for getting out of religious life and being able to charm as many women as he wanted, and the devil appearing as a man made it come to pass.

The young man left the convent within three years and was able to use assorted powders and potions to be able to open doors and take women to bed, Francisco himself told the Inquisition.

In addition, the alleged devil asked him to have one of his lovers make a rag doll with which to worship him.
After some time living a madcap an uninhibited life, Francisco began to feel remorseful about it all and decided to go to the Inquisition and report himself for heresy.

“He was so desperate that he preferred the Inquisition’s prison to remaining in the convent,” De Avila said.

It was then that the story of the priest began to fall apart: the commissioner handling the case discovered that the women with whom Francisco claimed to have had relations did not exist – until he came to Josefa.

The woman told the commissioner that the doll was not made to worship the devil but rather while Francisco was locked up in the convent so that he could remember his lover when he looked upon it, “even with a sexual connotation,” the historian added.

She also turned over the letters Francisco had sent her, in which they signed themselves with nicknames and included code words and abbreviations.

“With this, Josefa revealed the love they had for each other and the story Francisco … had crafted began to crumble,” De Avila said.

After this, the priest was found guilty only of having claimed that hell was a lie and that souls could change bodies, concepts that for the 18th century Inquisition were completely unacceptable.

After his conviction, it is not known what the fates of the two lovers were, whether they had any further contact or whether Francisco was able to focus his life in any particular way.

Housed at the AGN are more than 1,500 volumes of reports prepared by the Inquisition that were hidden when Mexico was in the midst of obtaining its independence from Spain and turned over to the Anthropology Museum by historian Silvio Zavala during the 20th century.