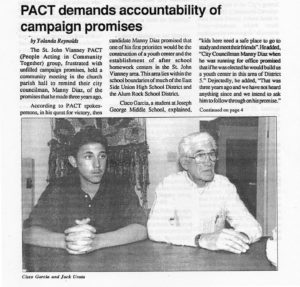 The St. John Vianney PACT (People Acting in Community Together) group, frustrated with unﬁlled campaign promises, held a community meeting in the church parish hall to remind their city councilman, Manny Diaz, of the promises that he made three years ago.

According to PACT spokes-persons, in his quest for victory, then candidate Manny Diaz promised that one of his first priorities would be the construction of a youth center and the establishment of after school homework centers in the St. John Vianney area. This area lies within the school boundaries of much of the East Side Union High School District and the Alum Rock School District.

Cisco Garcia, 21 a student at Joseph George Middle School, explained, kids here need a safe place to go to study and meet their friends.” He added, “City Councilman Manny Diaz when he was running for ofﬁce promised that if he was elected he would build us a youth center in this area of District 5.” Dejectedly, he added, “That was three years ago and we have not heard anything since and we intend to ask him to follow through on his promise.”

Garcia explained that the PACT leadership had met with city officials and that there was indeed construction money that could be used to build a youth center in that District.

Advocates for the youth center joined forces with local retirees, who have watched the availability, affordability and quality of public golf courses vanish to either commercial or housing development. Jack Urata, a forty-year resident of the East Side of San Jose, explained that there is hardly a place for the average person to play golf anywhere in the city.

He explained that golf is a form of recreation that is in much demand by the retired community of the city. He said that many golfers could not afford the high club membership fees and monthly fees that the remaining golf courses now charge. Those membership fees begin in the low thousands and rise to over one hundred thousand dollars just to join a club and, further, require monthly fees for use of the golf course.

The lack of golfers in San Jose is a complaint often heard, especially in the senior citizen community. Recreational opportunities for them are as important as they are for other segments of the community.

Urata and other golfers were very unhappy when the 18-hole Thunderbird golf course was reduced to a mere 9 holes. One other regulation sized golf course remains on the East Side. It is the Pleasant Hill golf course, which is one of the few affordable golf courses in San Jose. It is used by residents from throughout San Jose.

According to golfers, although it is basically an excellent course, it is now not well maintained because the long-time owner has been agitating to sell the property to housing developers. Urata and others are urging that the city buy this property and keep it as a golf course.

Urata and other ﬁfty residents sadly point to the removal of a “great” golf course in that general area, years ago, in order to build the Eastridge Shopping Center.

Laura Palladino on last Monday evening, shared with a room full of residents, numbering over 250, results of the research which she and her group had conducted to asses the communities’ continued interest in the fulﬁllment of the promises that Diaz had made when he was running to office.

Palladino said that PACT members had polled over 200 families with one on one interviews. Their findings indicated that not only do the families in the area want a youth center but they also want a gymnasium and appropriate recreation programs as well.

Palladino said that parents were now even more adamant about providing safe alternatives for the children in view of their potential participation frightening increase in gang activities, substance abuse and school dropout that plagues young people throughout the city.

Palladino pointed out that both Superintendents of the major school districts, Joe Coto and Dr. Santiago Woods were supportive of PACTs requests and would work with the city in order to realize the wishes of this Eastside community.

In answer to direct questions Diaz said that his office would allocate $340,000 towards adding two portables at Joseph George School in order to expand the overcrowded recreation program which has an average of 60 youths crowded into one small classroom. Diaz says that he would also follow through on a promise to reimburse the school district for the recreation director’s salary. Diaz also said that he would make available $3,000 to place double doors between two classrooms in order to expand the space in the classroom currently used for the Joseph George after school program and promised another $3,000 for much needed recreational equipment.

Diaz also said that he would immediately form a task force to study the possible site/s of a youth center and gym. He agreed that the cost of such a facility would require approximately $2.5 million. He reminded those present that the Mayor’s Task Force on Youth and Recreation had recommended building at least one youth center for each district.

PACT and other community groups in San Jose have been consistent in seeking more recreational, after school and summer programs for the young in the city. Slowly, more programs have been established and new ground has been broken in developing jointly administered and sponsored programs that involved school districts, the County and other youth oriented agencies and groups.

As for the golf course, Diaz said that within two weeks he would form a joint committee involving Councilpersons George Shirakawa, Charlotte Powers in whose district lies the Pleasant Hill Golf Course, to discuss the possibility of purchasing that property or others for a municipal golf course in San Jose.

In 1993, a city-wide Golf Facilities Golf Task Force, headed by then City councilpersons George Shirakawa, Charlotte Powers and Joe Head, reported that the City had not constructed a golf facility since 1968 and that now only a single municipal golf course remained in town. At that time it was reported that the demand for golﬁng opportunities in the community would require the construction of 12 additional golf courses in San Jose. Since that time, the resident population has grown ever larger and the demand is likely to have increased even more.

Urata pointed out that golf is not a sport limited to enjoyment by the rich, but one that many people of all walks of life can enjoy and also benefit from the exercise and camaraderie of the game.