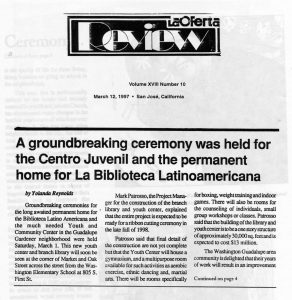 Groundbreaking ceremonies for the long awaited permanent home for the Biblioteca Latinoamericana and the much needed Youth and Community Center in the Guadalupe Gardener neighborhood were held Saturday, March 1. This new youth center and branch library will soon be seen at the corner of Market and 0ak Street across the street from the Washington Elementary School at 805 S. First St.

Mark Patrosso, the Project Manager for the construction of the branch library and youth center, explained that the entire project is expected to be ready for a ribbon cutting ceremony in the late fall of 1998.

Patrosso said that ﬁnal detail of the construction are not yet complete but that the Youth Center will house a gymnasium, and a multi-purpose room

available for such activities as aerobic exercise, ethnic dancing and, martial arts. There will be rooms specifically for boxing, weight training and indoor games. There will also be rooms for the counseling of individuals, small group workshops or classes. Patrosso said that the building of the library and youth center is to be a one structure of approximately 30,000 sq. feet and is expected to cost $13 million.

The Washington Guadalupe area community is delighted that their years of work will result in an improvement in the quality of life for those living, doing business or going to school in the neighborhood.

This area, that is architecturally deﬁned by the lovely and recently restored Sacred Heart Catholic Church, has experienced many changes in the last few years-some of which are very disturbing. It, like too many other neighborhoods in the city, has had to fend off drug dealers who hope to establish a stable market or to recruit vendors who would hawk their goods in other neighborhoods of the city. There have been too many incidents of crime in this community, many of whom are recent immigrants that came to the United States in hopes of improving the quality of life for their families and to improve the opportunities available to their children.

Ray Moreno, founder and resident of the Guadalupe Washington Neighborhood Association. explained to la Oferta that, without the hard work and coming together of the diverse groups active in the community, this happy event would likely not have happened. Moreno explained that his neighborhood group began meeting in 1990 out of concern to trends in that area that, if left unrestrained, would severely impact the quality of life in their neighborhood.

Among those who became involved besides the neighborhood association, Moreno says, was Washington Elementary, under the leadership of the principal, Al Moreno (no relation to Ray), the Washington Elementary Padres Club, the Willow Street Business and Professional Association, the Amigos of the Biblioteca Latinoamericana and the Sacred Heart P.A.C.T. (People Acting in Community Together). 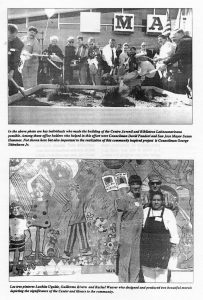 This gathering of concerned and committed organizations and their leaders were distinguished by their determination to make things better for the children and families in the community. It was several years ago that the then Willow Street Business and Professional Association Officer, Joyce and John Oliver (owners of the Willow Street Party and Gift Store), explained that the success of any business was dependent upon the quality of life their customers enjoyed. To that end their group had long been active in sponsoring essay, poetry and art contest in which children could participate for reward and recognition.

With so many voices involved, it was a slow process but, for all of them, the objective was clearly understood and much desired. Their differences was slowly resolved and now in just a little more than one year, the Center will be fully operational.

The city has already built into its budget the funding ($600.000) for the operation of the Youth Center. The Biblioteca is funded as are other branch libraries in the City and is already operational at its current location on Locust Street.

Already community leaders have established a soccer league that plays on school grounds of Washington Elementary. The League has enrolled over 100 youth. Carlos Acosta began this program with a $1,000 grant (BRIC. Building Resources in the Community) funded by the Community Grant Foundation.

Other changes in the community are expected as well. Washington Elementary will have to add classroom space to its current facility to accommodate both a growing student population and the reduced class-size, for grades one through three, that is encouraged by Governor Wilson. Both the Biblioteca and the school are expected to support the establishment of at least one, if not two, after school homework centers in the neighborhood. The student population at Washington Elementary is expected to grow in the near future from 510 students to 700. The gymnasium will be used jointly by the Elementary School and the Youth Center. Currently there is no gymnasium at Washington Elementary.

For many in the community, this project is signiﬁcant for many reasons. Lt was inspired by a real need and the entire community, by working many long hours was able to arrive at a project and program that now brings smiles and tears of joy in the realization that dreams do come true. Guadalupe Washington Neighborhood Association President Ray Moreno concluded his long list of credits and thanks to those who were involvedwith the words, “Si se Puede!”

If you wish more information on this project, you may leave a message for Ray Moreno at 293-2582 and he will return your call as soon as possible. © La Oferta Newspaper.