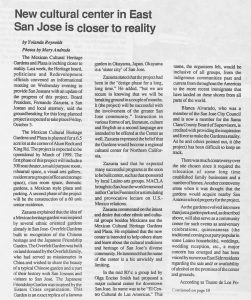 The Mexican Cultural Heritage Gardens and Plaza is inching closer to reality. Last week, the Heritage board, politicians and Redevelopment ofﬁcials convened an informational meeting on Wednesday evening to provide San Joseans with an update of the progress of this project. Board

The Mexican Cultural Heritage Gardens and Plaza is planned for a 6.5-acre lot at the corner of Alum Rock and King Rd. The project is expected to be operational by March of 1999. The ﬁrst phase of this project will include a 500 seat theater, a multi-purpose room, rehearsal space, a visual arts gallery, resident arts groups (ofﬁce and storage space), class room space, thematic gardens, a Mexican style plaza and parking. A second phase of the project will be the construction of a 60-unit senior residence.

Garden. The Overfelt Garden was built on land donated by the Overfelt family, who had served as missionaries in China and wished to share the beauty of a typical Chinese garden and a part of their history with San Joseans and visitors to San Jose. The Japanese Friendship Garden was inspired by the Sisters Cities organization. This Garden is an exact replica of a famous garden in Okayama, Japan. Okayama is a ‘sister city’ of San Jose.

Zazueta stated that the project had been in the “design phase for a long, long time.” He added, “but we are secure in knowing that we will be breaking ground in a couple of months. It (the project) will be successful with the involvement of the greater San Jose community.” Instruction in various forms of art, literature, culture and English as a second language are intended to be offered at the center as well. Zazueta expressed the belief that the Gardens would become a regional cultural center for Northern California.

Zazueta said that he expected many successful programs at the soon to be built center, such as that sponsored by local Latino arts groups. MACLA brought to San Jose the world renowned author Carlos Fuentes for a stimulating and provocative lecture on U.S.-Mexico relations.

Zazueta commented on the intent and desire that other ethnic and cultural groups besides Mexicans use the Mexican Cultural Heritage Gardens and Plaza. He explained that the new center is intended to help others share and learn about the cultural traditions and heritage of San Jose’s diverse community. He lamented that the name of the center is a bit unwieldy and limiting.

In the mid 80’s; a group led by Olga Enciso Smith had proposed a major cultural center for downtown San lose. its name was to be “El Centro Cultural de Ias Americas.” This name, the organizers felt, would be inclusive of all groups, from the indigenous communities past and current front throughout the Americas to the more recent immigrants that have landed on these shores from all parts of the world.

Blanca Alvarado, who was a member of the San Jose City Council and is now a member for the Santa Clara County Board of Supervisors, is credited with providing the inspiration and force to make the Gardens a reality. As he and others pointed out, it (the project) has been difficult to keep on track.

There was much controversy over the site chosen since it required the relocation of some long time established family businesses and a number of homes. Another controversy arose when it was thought that the gardens would acquire nearby San Antonio school property for the project.

As the gardens evolved into more than just a garden park and, as described above, will also serve as a community center for such events as anniversary celebrations, quinceañeras (the traditional coming out party popular in some Latino households), weddings, wedding reception. etc., a major concern has emerged and has been voiced by numerous East Side residents regarding the sale and/or availability of alcohol on the premises of the center and grounds

According to Teatro de Los Pobres executive director and president Felix Alvarez, there is already an over saturation of liquor outlets” in that area.”

San Jose Councilman Manny Diaz stated to those gathered last week that he would be working with two other Council members who will, this week, submit language for an ordinance that will set limits to the number of liquor outlets allowed in any one area. He promised that all non-conforming City permits for liquor sales would be reviewed. The intent, he explained is that there by a policy that those city ordinances that now restrict liquor sales at a certain distance from school and churches be strictly enforced.

Already four arts groups have been identified as ‘resident arts groups’ for the new center. These are; Los Lupeños, a dance troupe, Arte Flamenco. An instrument and dance group, the Minority Arts GuiIt, and Teatro Vision, a state group.

The Garden’s operating expenses will be the responsibility of the Mexican Heritage Corporation. Pete Carrillo, the Heritage Foundation president, is a former aide to Councilwoman Alvarado. For a startup organization that has taken a while to raise the $3 million in matching money to the $25-$30 million contribution of the Redevelopment Agency, remaining viable will be a major challenge. The Heritage Corporation will need to realize an annual $1 million proﬁt to meet their operating expenses. Revenue is expected from the rents paid by me resident arts groups, fees paid for admissions and facility rentals. Zazueta indicated that the Board is expecting that the City will help in this matter as “it has for such arts groups as the Symphony, Ballet, etc. All of whom receive substantial and annual support from the City.

The Redevelopment Agency is a part of city government. Its Board of Directors are the members of the City Council, including the Mayor. The Executive Director of the Agency is Frank Taylor. The agency has contributed funds (made possible from property taxes collected in areas designated as redevelopment project area) to such projects in San Jose as the Fairmont Hotel, the Arena, the new Convention Center, the Center for the Performing Arts, etc.

Zazueta stated that the Board is looking for four new board members, preferably with strong connections in the electronic industry. And, like most organizations, they are asking for more volunteers.

For more information on the Mexican Cultural Heritage Gardens, or if you wish to volunteer, you may contact the Mexican Heritage Corporation at 292-5197. © La Oferta Newspaper.