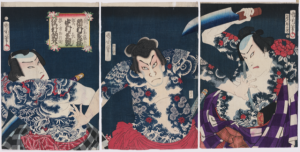 “Tattoos in “Japanese Prints” on Exhibit at Asian Art Museum

About 45 million Americans have at least one tattoo, although it may seem like even more if you live in the Bay Area.

“Tattoos in Japanese Prints” exhibition recounts how large-scale, intricately-Inked pictorial tattoos — what we now recognize as a distinctly Japanese style — emerged in 19th-century Japan in tandem with woodblock prints depicting tattooed heroes of history and myth.

With more than 60 superb works from the Museum of Fine Arts, Boston collection, “Tattoos in Japanese Prints” uncovers the complex interplay between ink on paper and ink on skin, revealing the origin of some of the most world’s enduring and popular tattoo motifs.

Don’t miss the exhibition related events such as: Panel Discussion on Japanese Tattoos – The Visual Splendor of the  Floating World; Ukiyo-e Printing Workshop; At the Table – “Knives and Needles”; At the Table – Talk and Tea with Monica Lo and Felicity Chen; Live Tattooing at the Asian Art Museum; At the Table – Talk with Ichi Sushi Executive Chef Tim Archuleta. 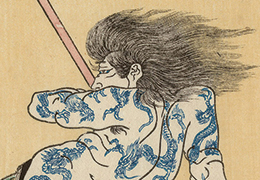 Definitely not to be missed exhibit and a number of fun activities.

“Archduke” is on its Way to Silicon Valley

Can one moment derail a century?  Find out by visiting the Mountain View Center for the Performing Arts as the TheatreWorks company is staging “Archduke” written by Pulitzer Prize finalist Rajiv Joseph who explores the cataclysmic 1914 assassination of Archduke Franz Ferdinand of Sarajevo which ignited World War 1. On a darkly comic quest for immortality, three hapless insurgents prove that little has changed from then to now. 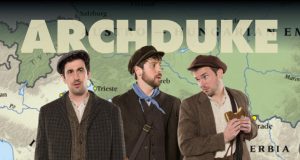 “Humor with a global conscience”- Los Angeles Times. Intriguing and mentally stimulating this New Works Festival sensation is from the author of Broadway’s “Bengal Tiger” and the “Baghdad Zoo” fame.

Mountain Center for the Performing Arts

“Rusalka” at the War Memorial Opera in San Francisco

Known in the world’s concert halls for his brilliant symphonies and chamber music, Dvořák dedicated himself to opera late in life and created a masterpiece in Rusalka, which had its 1901 premiere in Prague.

Filled with references to Czech folk music and the composer’s stirring, orchestral textures, the opera features many memorable moments, including the title heroine’s Act I soliloquy, “Měsíčku na nebi hlubokém,” or the “Song to the Moon.”

I am looking forward to see and hear one of my favorite operas and so should you. It is a true magic on stge. Each presentation of Rusalka at the War Memorial Opera House features a 25-minute Pre-Opera Talk by music historian Derek Katz. Beginning 55 minutes prior to curtain,

The award-winning Russia ballet choreographer Boris Eifman is famed for his dramatic and sensationally staged dramas from adaptations of LeoTolstoy’s “Anna Karenina” and Chekhov’s “The Seagull” to the biographical ballet “Rodin, “Her Eternal Idol”.

In his new adaptation Eifman revives the theme of sculpture in “Pygmalion Effect.”

Set to a lyrical music by composer Johann Strauss Jr, “Pygmalion” reimagines the mythical sculptor who falls in love with his beautiful creation as a ballroom dancer.

What will happen? Anything can happen and the rest is a mystery for you to see and discover on the stage of Zellerbach Hall in Berkeley.