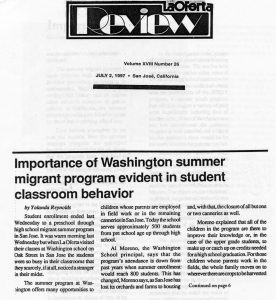 Student enrollment ended last Wednesday to a preschool through high school migrant summer program in San lose. It was warm morning last Wednesday but when La Oferta visited their classes at Washington school on Oak Street in San lose the students were so busy in their classrooms that they scarcely, if at all, noticed a stranger in their midst.

The summer program at Washington offers many opportunities to children whose parents are employed in ﬁeld work or in the remaining canneries in San Jose. Today the school sew approximately 500 students from pre-school age up through high school.

Al Moreno, the Washington School principal, says that the program’s attendance is down from past years when summer enrollment would reach 800 students. This has changed, Moreno says, as San Jose has lost its orchards and farms to housing and, with that, the closure of all but one or two canneries as well.

Moreno explained that all of the children in the program are there to improve their knowledge or, in the case of the upper grade students, to make up or catch up on credits needed for a high school graduation. For those children, whose parents work in the ﬁelds, the whole family moves on to wherever there are crops to be harvested and the children’s school attendance is disrupted.

The summer migrant program is made possible with federal funds. Besides providing instruction in mathematics, English (reading and writing), U.S. history, biology, and the other subjects common to public schools in California, the summer program provides a pre-school program for those just beginning school here.

A distinctive feature of the y summer program is the involvement of parents as volunteers at the lower grades. Rosario Vasutin, a pre-kindergarten school teacher, explained that the school encouraged parents to help for many reasons. Children more readily adjust to coming to school. Parents can become familiar with the school system and the expectations for school readiness of their child It was intriguing to see the children grouped about, working at various tasks, quietly chatting with each other while each child happily explored his or her skill in fashioning an object of clay or by balancing little boats in water channels as if they were each a harbor master. Others were busy exploring colors and design with paper and paints.

Vasutin explained that the children are engaged in various learning projects in blocks of thirty minutes. They leave school after lunch when a sibling or relative walks the child home. For the older children school ends at 2:30 p.m. The children were so intent the day must go by quickly for them.

In the kindergarten class, groups of children sat at round-tables learning the names of colors. The teacher here was assisted by teacher aides, some of whom were high school students who wished to earn extra credit and others who are participants of the SPEDY program, a summer youth program that offers teenagers a variety of paid work experiences including that of teacher aides. None of the classrooms had low enrollment – the summer program is well attended and without teacher assistants there would be far too many students for just one teacher.

Kindergarten teacher Jean O’Connor, explained that, in her classroom, instruction was bilingual, Spanish and English. Moreno explained that the majority of the students were from Michoacan state in Mexico. The objective, the educators explained, was to transition the children into English, but without forcing them to forget the first language, Spanish.

The American public has been subjected to endless media views of rude and inattentive school children, but a visit to Washington school immediately dispels such images. Few people would expect a classroom of 32 ﬁrst graders to be as those in grade teacher Jose Murguia’s classroom. He explained that he could not teach so many children at one time without the help of the two aides assigned to his classroom, who are there to help his students with their questions and to help guide them in their studies.

One of the more innovative instructional programs is provided for the students in high school classes. They are provided with individualized instructional packets, covering the full range of the core academic subjects that must be mastered for graduation from high school.

Amelia Romero, the Migrant Resource teacher to help the students at Washington, explained that this instructional method was excellent for the students but required intense attention from the teacher. She says that a recent change in the way the students tests were graded made it easier to help the students if they needed to improve in some subject. Before, she said, the students took a final test which were then sent to Sacramento for grading. The results were not known for weeks and, by that time, the student was long gone and could not be tutored in their areas of weakness.

Individualized instruction has been promoted by some innovative and thoughtful educators as a way to make learning less tedious while, at the same time, providing the student as much time as necessary to master a subject. Advocates of individualized instruction say that some students learn different subjects at different rates of speed and, too often, become bored in the classroom as the teacher struggles to move the entire class along at the same speed. Another advantage of individualized instruction, advocates say, is the necessity to focus on the essential concepts to be mastered in each subject, thereby making sure that each student who earns a degree or passes a class can be conﬁdent that they have acquired the same skills and learning in a particular subject matter as their fellow classmates. The students must be certiﬁed to have mastered those basic concepts that serve as a foundation for advanced study in that subject area.

Romero explained that the best use of the computer for individualized instruction is in its use in test giving. She explains, that it will make the checking of answers on state test easier to administer and grade. This possibility will become a reality this coming September. Moreno explained that in general computers were used in the classroom for word processing and also to familiarize the children with computers.

Last Wednesday morning a class full of third graders was busy working out an assignment at a bank of computers that were sufficient in number to accommodate each child with their own computer.

Children seem to readily adapt to computers, with as much facility as the older generations took to the typewriter.

The summer migrant program has been offered every summer for the last decade. Even though it is now smaller, it is obvious it is still much needed. The attentiveness of the children and their attendance in this program attests to the value in which this education is held by the children themselves and by their parents.

Moreno, his teachers and staff, who are all San Jose Unified School District professionals, are justifiably proud of this much-needed migrant school program that is offered in the heart of San Jose. © La Oferta Newspaper. 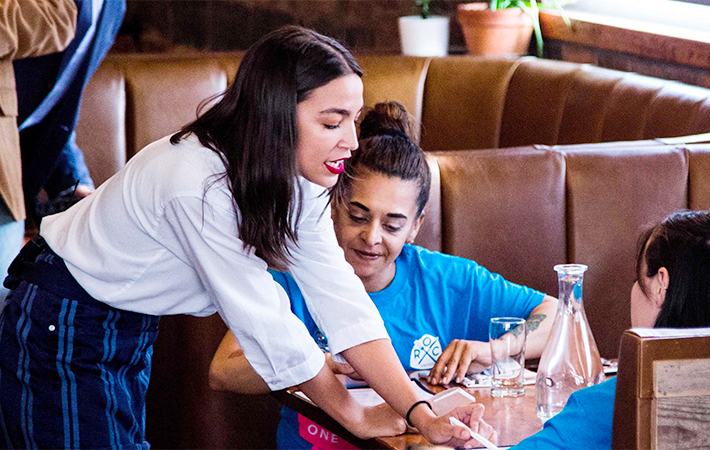