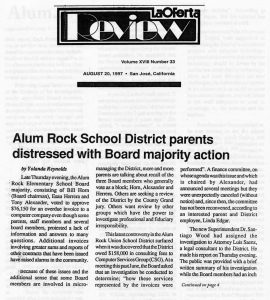 Late Thursday evening, the Alum Rock Elementary School Board majority, consisting of Bill Horn (Board chairman), Esau Herrera, and Tony Alexander, voted to approve $76,150 for an overdue invoice to a computer company even though some parents, staff members and several board members, protested a lack of information and answers to many questions. Additional invoices involving greater sums and reports of other contracts that have been issued alarms in the community.

Because of these issues and the additional sense that some Board members are involved in micro-managing the District, more and more parents are talking about recall of the three Board members who generally vote as a block: Horn, Alexander and Herrera. Others are seeking a review of the District by the County Grand jury. Others want review by other groups which have the power to investigate professional and ﬁduciary irresponsibility.

‘This latest controversy in the Alum Rock Union School District surfaced when it was discovered that the District owed $158,000 in consulting fees to Computer Services Group (CSG). At a meeting this past June, the Board asked that an investigation he conducted to determine; “how these services represented by the invoices were performed.” A ﬁnance committee, on whose agenda was this issue and which is chaired by Alexander, had announced several meetings but they were unexpectedly canceled (without notice) and, since then, the committee has not been reconvened, according to an interested parent and District employee, Linda Edgar.

The new Superintendent Dr. Santiago Wood had assigned the investigation to Attorney Luis Saenz, a legal consultant to the District. He made his report on Thursday evening. The public was provided with a brief written summary of his investigation while the Board members had an inch-thick report. Each Board member at one or another time remarked at the size of the report and that they had only received the full written report late in the afternoon, on the day before. They complained that they had not had time to read and analyze the contents.

Following Saenz’ brief overview of the ﬁndings of his investigation, newly appointed Board member, Nancy Knight, made a motion to accept the report. Board member Herrera took exception to the word “accept” and urged a change of the word to that of “receive,” on the basis that the board membership had not had time to thoroughly read the lengthy report and that it merited far more discussion and analysis. His modification was accepted and the motion was unanimously approved.

The attorney representing the consultant company, CSG, pointed out that his client had been waiting many months for reimbursement for his services and that at least two of the invoices should be approved that evening.

The Board majority agreed and voted for approval, but not before allowing public input (all critical of the process) and making statements indicating that they (including the Board majority) had not read the report in its entirety. Dr. Wood had previously stated that no action would be taken that evening regarding the 82-page report other than to “receive” the results of the investigation conducted by attorney Saenz. He obviously was overruled after Saenz indicated a vote on these items would be legal. Following the Board meeting several in the audience continued to question the legality of taking an action, even if the report announced in the agenda was not indicated as an action item.

Mr. Alexander justified such action on the basis that the Board would only be following previous Board approval of contracts and invoices weeks and months after the fact. Dr. Wood provided the Board with education code specifying the correct Board procedure. He suggested that the Board attend a workshop to better understand the proper procedures involving expenditure and spending authority. The Board accepted this recommendation.

A parent, Linda Powell, stated, “I was going to leave (the board meeting) earlier but l am glad that l did not – now I remember why I quit coming to the Board meetings 5 years ago.” She added. I want answers.” A school district parent in the audience pointed out to this writer that many parents had questions regarding the numerous change orders which had in some instances, more than doubled the sum originally requested for the specific contracted services. She concluded her comments by saying that she would be joining others who are considering the recall of this board majority.

According to the report a staff person, Sandra Jewett, seems to be central to this controversy. According to sources who wish anonymity. Ms. Jewett was hired into the top-level District administration in August of 1996 before Dr. Wood was hired.

According to the investigation conducted by Saenz. Ms. Jewett had been instructed to prepare the District for participation in Net Day II and later Net Day III. (a day-long event set aside for preparing classrooms in San Jose for computer hook up). To this purpose, she entered into oral agreements with Mr. Wilson, representing CSG, in August. Later, the board approved a contract with the ﬁrm for $8,500 which was later amended to the amount of $15,000. The District entered into another contract of $840,000, on December 12, 1996. for “On-site computer training.” According to Saenz’ report, this last contract has neither been invoiced or paid.

Board members Felix Alvarez and Nancy Knight, both supportive of augmenting the District’s educational program with computer technology, expressed their concern that computer technology should be driven by the curriculum rather than by technology. More and more educators are now challenging the notion that a computer in the classroom is as useful as some have claimed because they say, its use is not well integrated or used to advantage, by the students and the teachers.

Board member Herrera stated that he was anxious to see the school children excited upon finding and reading the Nation’s Constitution on the Internet. That information, however, is readily available in many books found in every library and does not require access to a computer.

Enlightened educators who specialize in the learning process have been searching for ways in which computer technology can complement and enhance the learning experience of students. According to a recent article, one of the most beneﬁcial uses of the computer in the classroom is for word processing and for accessing information not readily available but now accessible via the digitalization of special collections.

This ongoing controversy illustrates a major split within the board. The votes on most serious issues have been 3-2 with Alvarez and the newly appointed board member Knight in the minority. Alvarez also pointed out that of the nine Board committees, he was assigned by Board President Bill Horn to only one, while Tony Alexander had been assigned to six committees. Here too, there was controversy, since many see these small Board committees to be involved in micro managing the district. Alvarez

urges that standard procedure be adopted for the establishment and function of board committees. He hoped that such procedures would eliminate some rumors ongoing in the District. There are some who say that an ‘old boy’ or ‘old friends’ system is the order of business in the District. Dr. Wood provided education code provisions for the function and purpose of such committees to the Board. As the discussion proceeded, Herrera advised that the Board membership should take advantage of (California School Board Association) conventions and should there seek out workshops regarding this issue.

Last week’s meeting was not all controversial. Dr. Wood and an obviously dedicated staff have been positive highlights was the adoption of the new literacy standards developed by teachers (one from every school in the District) and parents for the “Literacy Program of the District.” These standards were developed and agreed upon after several weeks of intensive meetings which reviewed standard adopted in other similar sized and composed districts in the State. Dr. Wood stated that his charge to the committee was to develop a literacy program with academically rigorous standards, rooted in assessment and cognizant of the globalization of the nation’s economy.

The District has planned an ongoing literacy assessment program that gives a child, the teacher and parent immediate feedback of the students reading ability thereby correcting problems immediately and not wait until an end of the year assessment that would not be of practical value to the student until the next semester.

Several committee members spoke with pride of their participation in this committee. It was pointed out that teachers, and others who willingly participated, without pay, even though the meetings occurred during summer vacation time.

District parent and teacher, Dolores Marquez, pointed out that the commitment of those on this committee clearly reflected the interest of many people in the betterment of the school and respect for the value of quality education.

Dr. Wood also made a brief report on the status of the “Mayfair Collaboration,” in which a besieged neighborhood within the Alum Rock School District boundaries is in the process of making improvement for the neighborhood. This group includes business leaders, the school district and public officials as well 5 law enforcement personnel. Wood pointed out that top subject on the list at those meetings was the importance of quality education.

At the behest of the Superintendent, the District will be hosting a Back to School Festival on August 23. In preparation for this festival he and others in the administration have reminded local business people and District vendors that they should also invest in education and, so far, these companies have donated over $50,000 in school supplies for use this coming year. Those supplies, Superintendent Wood said, are already sitting in the District’s warehouse, along with 12 newly donated computers. There will be free food, beverages, speeches and other activities. Board members will have 5 minutes to speak and were told that this time limit would be strictly observed. A representative from the nation office for bilingual education in Washington D.C. has confirmed her participation in the celebration and is expected to make short speech on that day.

In all will be 100 booths at the celebration. Dr. Wood has infused new energy into the District and, along his presence and State moneys, the District’s buildings are undergoing major repairs (of classrooms and restrooms). The installation of at least 68 portables is expected to be completed by the time children return to school on September 2.

According to a staff person, the District’s curriculum is long overdue for review and this is now more important than ever in view of the huge expenditures that are likely if computers are purchased for the district. Herrera indicated, at the Board meeting, that computers are essential for the education of youth and that their purchase should not be delayed. District officials are hopeful that many children and their parents win come to the ‘Back to School Festival.’ The District is working very hard to

upgrade the educational program that is provided. Major repairs are ongoing. Perhaps those parents of the 800 students who have left the District in the last two years will find a good reason to return. Their absence deprives the school of funds and, more importantly, a huge cadre of concerned parents who expect and demand access to a strong academic program and a good learning experience for their children.

For more information on the District or if you wish to help in their program contact Dr. Santiago Wood at 928-6800. © La Oferta Newspaper. 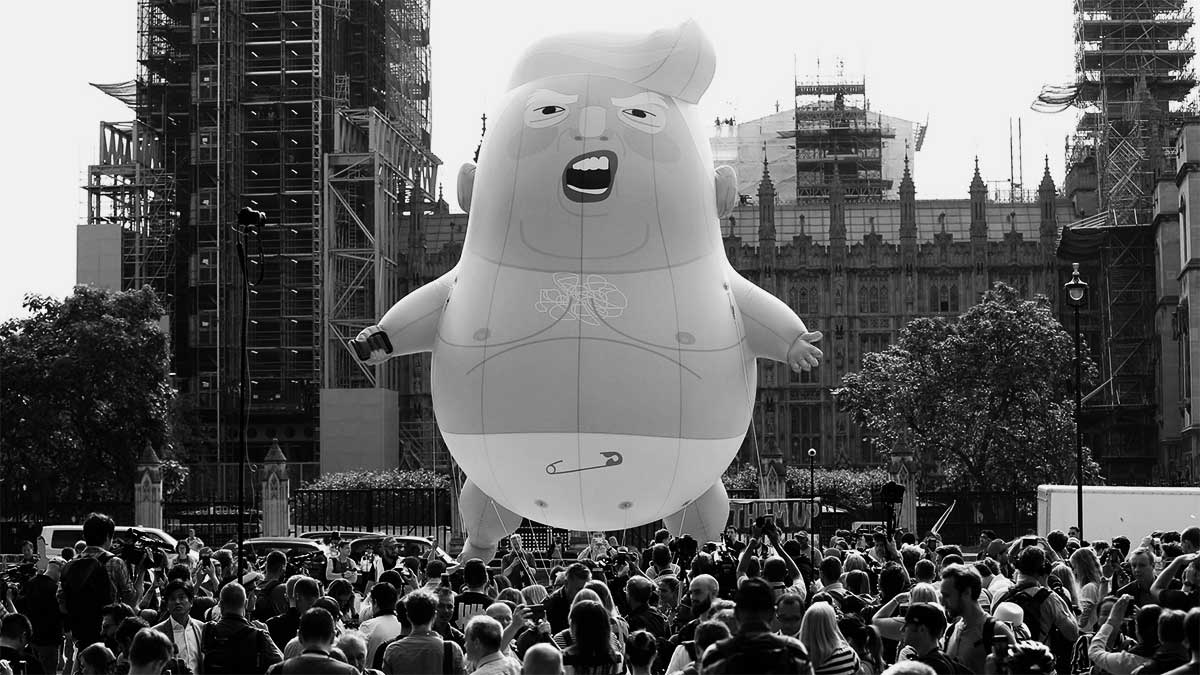