Alum Rock School District Board served with a recall notice 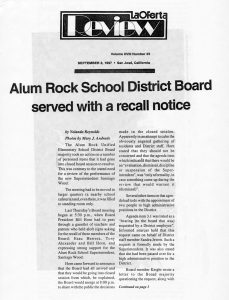 The Alum Rock Unified Elementary School District Board majority took no action on a number of personnel items that it had gone into closed board session to resolve. This was contrary to the stated need for a review of the performance of the new Superintendent Santiago Wood.

The meeting had to be moved to larger quarters (a nearby school cafeteria) and, even there, it was ﬁlled to standing room only.

Last Thursday’s Board meeting began at 5:30 p.m., when Board President Bill Horn had to pass through a gauntlet of teachers and parents who held aloft signs asking for the recall of three members of the Board: Esau Herrera, Tony Alexander and Bill Horn, and expressing strong support for the Alum Rock School Superintendent, Santiago Wood.

Horn came forward to announce that the Board had all arrived and that they would be going into closed session from which, he explained, the Board would merge at 8:00 p.m. to share with the public the decisions made in the closes session. Apparently in an attempt to calm the obviously angered gathering of residents and District staff, Horn stated that they should not be concerned and that the agenda item which indicated that there would be an “evaluation, dismissal, discipline or suspension of the Superintendent”, was “only a formality, in case something came up during the review that would warrant it (dismissal).”

Several other items on that agenda had to do with the appointment of two people to high administrative positions in the District.

Agenda item 3.1 was listed as a “hearing (to the board that was) requested by a District employee.” Informed sources held that this request came on behalf of District staff member Sandra Jewett. Such a request is formally made by the Superintendent. It was also stated that she had been passed over for a high administrative position in the District.

Board member Knight wrote a letter to the Board majority questioning the request, along with the item for hearings, since a request without discussion by the entire Board would not automatically merit a “hearing.” Knight alluded that a violation of the Brown Act may have occurred since there seemed to be a certainty that the Board majority had already determined upon the hearing request. The Agenda had already scheduled a hearing of the two personnel requests that were listed for consideration.

To the amazement of those who had chosen to wait in the Board Chambers until the 8 o’clock hour for the commencement of the scheduled open Board meeting, Board President Horn emerged from the closed session shortly before 7 p.m. Since it had been announced that the meeting would not convene until 8 p.m., it was necessary. however, to comply with State and District regulations on this matter and wait until 8:00. He then stated to those present that, “nothing happened” and answered that the Board would return at 8:00.

A staff person, who wishes to remain anonymous, explained that many District observers had speculated that the threat to dismiss the Superintendent had been made because the Board majority wished to override the Superintendent’s decision not to advance the two people which the Board majority wanted placed in high administrative positions in the District. These two individuals are allegedly the choice of Herrera, Alexander, and Horn.

Part of the special meeting dealt with an issue that District legal counsel, Luis Saenz, who admitted at the previous week’s meeting to have erroneously recommended to the Board that they could take action on an item that had not been placed on the agenda for ‘action.’ In a letter to the District, Saenz, stated that, by law, all action items “must be included in the posted agenda 72 hours before any items of business to be valid.” He added that, “there were some irregularities with the process to which individuals may take issue.”

Indeed, that is precisely the reason for much of the unrest in that District.

This recent controversy is symbolic of the problems that have been plaguing the District. Lack of District procedure have resulted in many; including parents, teachers and the non-majority Board members, asking numerous questions. There have been repeated demands for proper adherence to procedure and as well accountability.

This latest issue involves the costs and the procedure followed for a set of “Contracts” that were entered into with CSG (Computer Consulting Group) for providing District classrooms with computer facilities.

Board member, Felix Alvarez and Nancy Knight, approved the $7,080 invoice since it had been properly approved by the Board before it was let, but they objected to the second and larger invoice. They and numerous members in the audience, challenged the request because the second contract had never been approved by the Board and, further, it was not certain what work had been promised, what work had been completed and how this work complemented the computerization plan for the District. The total project, if allowed by the board majority, will exceed several millions of dollars.

One person stated that they had, “never seen an overall plan for the District,” and asked that they (board majority) produce, and allow for review, such a plan, if it exists, before spending any more money.

Another person pointed out that one budget item in an invoice included a request for payment of $250 to CSG for attendance at a free “Yahoo luncheon,” to which Jewett was reported to have invited Mr. Wilson, the principal of CSG.

It was alleged at the meeting that Sandra Jewett, without other administrative authority, had entered into an oral agreement with CSG that resulted in an invoice amount approaching $70,000, which has now been reduced to $52,000. In addition, it is claimed that no speciﬁcs detailing this agreement were ever drawn up.

From the podium, and shouted from the audience, were requests for her ouster or censure. Alvarez questioned how an employee of the District was empowered to present an “oral agreement” to the Board for payment, when District policy required prior Board and then Superintendent approval on each and every contract made by the District.

Knight questioned the amount owed, since a prior request had speciﬁed a sum of almost $70,000 but now the request was for the slightly more modest sum of $52,000, for the same job.

Board member Tony Alexander repeated a previous claim that, “to pay this bill without prior Board approval was the past practice in the district” and that as one Board member, he would approve the request for the remuneration of CSG.

Finally, a vote was taken and the second invoice was rejected, with Board member Herrera joining Knight and Alvarez in suggesting that more information was necessary before the bill could be paid.

A speaker and District staff person, Linda Edgar, reminded the Board that the sum of money going into this project were not insigniﬁcant. She pointed out that for the opening of this school year she had “been allocated a total of $2,800 for school supplies for an entire school.” She also asked, “what are the qualiﬁcations of Sandra Jewett?” Before working at Alum Rock, Jewett was an employee for two years at the San Jose Uniﬁed School District.

School teacher union president Colin Wood (no relation to Santiago Wood) protested that the “position (that Jewett holds) was never posted” and added that, “she was appointed by the Board’ majority.” He admonished the Board majority, stating, “You must evaluate who you are and who you are going to ﬁre.”

Rita Friedman asked for information on the bidding process of the District. Board member Knight expressed displeasure that, unknown to the Board, CSG had entered into sub contracts, thus raising confusion over exactly what this large contract entailed and what work had taken place.

Another speaker who is the District Grievance Committee chairperson asked the Board, “whose recommendation it was to do business with CSG.” She reminded Board members of the District policy number 3312, which requires that all contracts must be ratified and approved by the Board. She admonished the Board by stating, “when are you going to move forward with the business of educating the children of this District.” This statement brought the approximate 500 who were at the meeting to their feet in boisterous agreement.

Wood, in the short time he has been at his job, has managed to inspire the District’s staff and the larger community. At a recent school staff gathering for the beginning of the new school year, his words were greeted with a standing ovation at the end of his talk. At that meeting, he explained that he had high performance expectations for all. His high expectations included the performance of the children, the teachers and the staff, as well as for the administration and, in particular, for himself and the Board.

Last Thursday evening, the Board majority was served with a notice that there would be a recall drive against the three majority members: Horn, Herrera and Alexander. Activists in the community were saying that they had had enough and regardless of what happened that night, they were determined to replace these three with people who would have, as their first priority, the education of the children.

The recall petitioners have 90 days in which to collect an estimated 5,000-10,000 signatures that would allow a vote of the District community on the question of the ouster. The petitioners will soon know the exact number of signatures they will need to collect. It is usually determined as a percentage of the total number of registered voters. © La Oferta Newspaper. 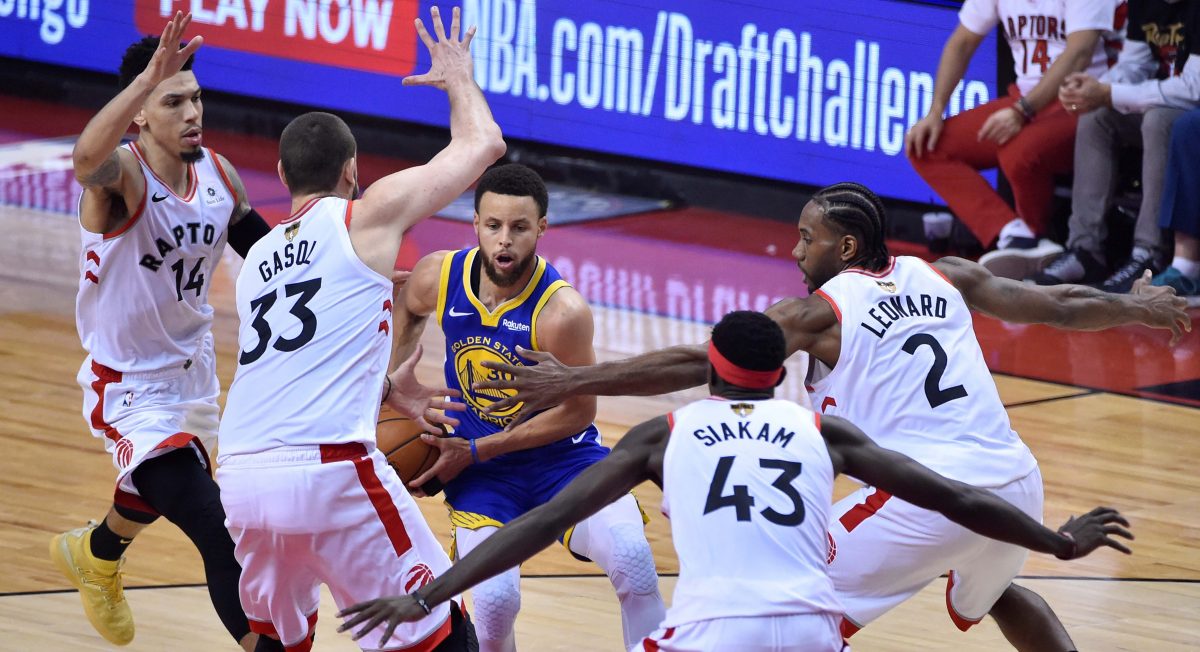