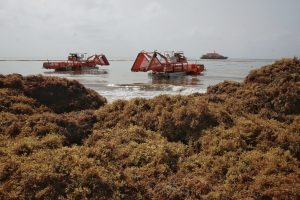 Morelos, Mexico, Jul 28 (efe-epa).- Thousands of tons of kelp collected in recent months in Puerto Morelos, in Mexico’s Quintana Roo state on the Yucatan Peninsula are being illegally dumped in jungle zones and into rivers, putting the local ecosystem at risk.

According to what experts told EFE, the approximately 40 tons of kelp gathered each day at the tourist resort are being taken to illegal rubbish dumps, an environmental crime that violates federal regulations.

When the macro-algae piles up in a certain spot, what leaches out of it during the decomposition process filters into the subsoil, as documented by researchers from the National Autonomous University of Mexico’s (UNAM) Ocean Sciences and Limnology Institute.

These leachates include ammonium, nitrogen, phosphorus, arsenic and sulfuric acid, as well as heavy metals like lead and even gold.

All these elements and compounds are being leaked into the region’s underground watercourses, UNAM’s Rosa Rodriguez-Martinez told EFE on Sunday.

Personnel from the Puerto Morelos Public Services Council and the Dakatso company have been working together since May to collect the seaweed as it washes up along the coast – which is a prime tourist spot.

Right at the beginning of the so-called Ruta de los Cenotes (Cenotes Route – a “cenote” being a water-filled pit or basin), a big tourist destination four kilometers (2.5 mi.) from the Caribbean coast, is one of the sites where tons of the marine plant have been dumped over the past year, seriously affecting the region, causing losses to the hotel sector and resulting in additional costs to clean up the local beaches.

Along this route runs a complex river network that, according to the city’s Urban Development Plan, is an important rainfall capture zone.

Since 2015, the Environment and Natural Resources Secretariat (Semarnat) has set the general parameters and guidelines for removing kelp from Mexico’s Caribbean beaches.

“The (dumping) will be performed at sites and in ways authorized by the responsible authority (Semarnat and the municipality),” is the language on page 12 of the regulation.

In 2018, the Environment Secretariat (SEMA) established seven final dumping sites that, despite the increasing tonnage of collected kelp, were reduced to five earlier this year, one of them being right in Pueto Morelos.

But if you ask Dakatso workers why they don’t take the kelp to the nearby official dump, they reply that it’s full and so they decided to change the dumping site.

Neither the official site nor the new one are outfitted with environmental protection to prevent leakage, that is to say a membrane of impermeable material.

When specifically asked about it, the Dakatso Group’s director, Dagoberto Ruiz Lavin, denied the illegal dumping, arguing that the firm’s eight-month contract does not specify the kelp’s final destination.

It has been verified on several occasions, however, that Dakatso personnel fill a city truck with the kelp, drive it to the Ruta de los Cenotes and empty it there. Some of the water in the cenotes eventually makes its way underground to the ocean, carrying the pollutants from the seaweed.

And according to a recent UNAM study, the combination of materials coming from the kelp creates low-oxygen conditions in the water, which has caused the death of members of 78 species.

Eutrophication – the chemical change in the water created by excess nutrients from the decomposing kelp – has also killed off more than 30 percent of the world’s second-most-important reef system off the coast of Quintana Roo, Maria del Carmen Garcia Rivas, the head of the Puerto Morelos National Reef Park, told EFE.