Expansion of quay on Mexican island of Cozumel worries environmentalists 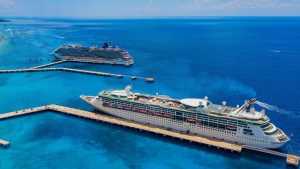 12 (EFE).- One of the world’s busiest cruise ship quays, on the Mexican island of Cozumel in the Caribbean, is undergoing expansion work to enable it to handle 50 percent more passengers, and the project will allow it to receive up to 6.5 million visitors per year, a situation that has sparked alarm among environmentalists.

The investment in the construction of cruise ship berths and the enlargement of the quay at the Cozumel International Cruise Ship Terminal presently stands at 56.6 million pesos (about $2.9 million) and is being made by SSA Mexico.

With the modernization of the quay, built in 1974 but which has been modified 12 times over the years, up to three Radiance class cruise ships will be able to dock simultaneously.

“The expansion is necessary, given that the flow of cruise passengers in Cozumel has increased and will continue increasing,” the tourism secretary for Quintana Roo state, Marisol Venegas, told EFE.

She said that so far this year, the cruise passenger flow will surely increase for two reasons: first, Cuba is losing almost 600,000 cruise passengers this year due to the sanctions and restrictions newly imposed by the United States on the communist island.

“We’re coming in as the first option for those cruise companies that will not be able to serve or enter Cuba,” she added.

The second reason is similar, but linked to Puerto Rico, since that island was recently affected by a devastating hurricane and travelers who previously opted to visit it are now selecting Cozumel.

The challenge right now is to get tourists to spend the night on the island and thus boost hotel occupancy. This year, Cozumel has suffered a drop in hotel occupancy: In July (the high season), occupancy was 68 percent, 11 percent below what it had been in July 2018.

According to figures compiled by the Mexican federal government’s Tourism Secretariat, between January and June 2019 the number of cruise passengers visiting Mexico was 4.73 million, 5.7 percent more than in 2018, while they spent $324.1 million, 7.4 percent more than during the same period last year and an average expenditure of $68.40 per day, 1.7 percent more. 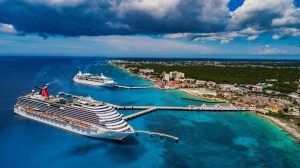 Currently, Semarnat, Mexico’s Environment and Natural Resources Secretariat, is evaluating the viability of the Cozumel project because it is responsible for safeguarding the environment.

If approved, the island of 478 square kilometers (184 square miles) could receive more than six million cruise passengers per year, or two million more than it currently hosts, and this has caused alarm within the National Commission of Protected Natural Areas (Conanp) and among academicians and environmentalists.

According to Brenda Hernandez, the assistant director of Conanp tasked with overseeing the Arrecifes National Park on Cozumel, a protected area adjacent to the cruise ship terminal, the new construction could negatively impact the health of local corals.

The reef barrier there is part of the Mesoamerican Reef System, the world’s second most important such system, which is currently suffering from a “rare disease” – known as “white syndrome” – that has wiped out more than 30 percent of the coral there, apparently due to the increase of nutrients in the vicinity with the dumping of wastewater.

In the coming weeks, Conanp will issue a technical opinion on the project.

“We’re recommending no construction and no new projects. Why? Because of the presence of white syndrome disease, since it’s a stress factor increased by visitors and all that results from that,” she told EFE.

With the increase in cruise passengers, she said, the number of visitors to the Arrecifes National Park will also rise, although the park has a maximum capacity of 2,500 visitors per day. With the higher passenger inflow, some 3,500 people will want to visit the park every day.