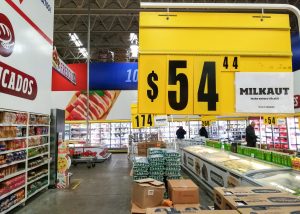 A view of a board of prices at a supermarket, in Buenos Aires, Argentina, 14 August 2019. Argentinian President Mauricio Macri announced economic measures today, to benefit Argentina’s middle class until the end of the year, and took responsibility for the results of past Sunday’s primaries. EFE

Buenos Aires, Aug 14 (EFE).- President Mauricio Macri announced a series of measures before the opening of the financial markets on Wednesday aimed at helping Argentina’s middle class through the end of the year and took responsibility for his poor performance in last weekend’s primary elections.

“Regarding the results of the elections, understand that I heard you. It’s my and my governing team’s full and exclusive responsibility that this happened,” the president said.

Macri said the measures would help “17 million workers and their families.”

The president acknowledged that he had made implementing structural reforms a priority to lay a solid foundation for the economy.

Macri said Sunday’s primaries showed that voters wanted action on the social front and he would “do more than ever to continue being with” the people “in this change.”

Among the measures announced by the president was a hike in the minimum wage to an unspecified level, a move that will benefit about 2 million workers.

The amount of the increase will be determined by the National Employment, Productivity and Minimum Wage Council, which includes representatives from the government, labor and business.

Macri said the measures were also aimed at helping small- and mid-sized businesses.

“We want to help them because we recognize their value and know about the debts they have taken on,” the president said, adding that his administration would implement “a plan that will allow them to pay tax debts over 10 years.” 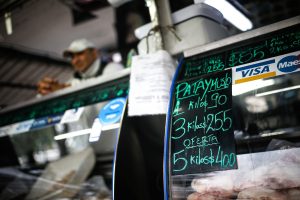 Macri said the government would increase funding for the Progresar scholarship program by 40 percent and freeze fuel prices for 90 days.
Public sector employees, armed forces members and security forces personnel will get a bonus of 5,000 pesos per month, the president said.

“In the past 48 hours, it was made clear that political uncertainty does a lot of damage and forces us to be responsible,” Macri said, referring to the sell-off in the stock market and the plunge in the value of the peso since the primaries.

The policy shift failed to calm the financial markets, with the Argentine peso opening lower for the third consecutive trading session.

The peso, according to the Banco Nacion, opened trading at 61 per US dollar after closing at 58 per dollar on Tuesday.

Argentina’s risk premium rose from 1,771 basis points on Tuesday to 1,867 basis points early in the session on Wednesday.

On Tuesday, election officials began the final tally of the votes from the primary elections, a process that should take about 10 to 15 days.

In Sunday’s primaries, Peronist presidential candidate Alberto Fernandez, according to provisional election results, finished 15 percentage points ahead of Macri.
Fernandez and vice presidential running mate Sen. Cristina Fernandez, who governed Argentina from 2007 to 2015, got 47.65 percent of the vote on the ticket of the Peronist Frente de Todos.

The 60-year-old Macri, who headed the ticket of the Juntos por el Cambio party, received just 32.08 percent of the vote, suffering a serious blow to his re-election chances.

Argentina will hold a general election on Oct. 27, with the next president being sworn in on Dec. 10 for a four-year term. EFE