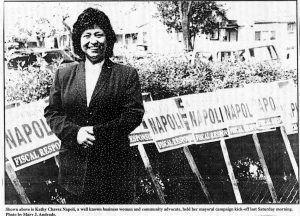 In the welcome spring sunshine, last Saturday afternoon Mayoral candidate Kathy Chavez Napoli held her campaign kick-off. It was held at the preschool, Santa Maria Children’s Center, that she owns and helps manage near downtown San Jose. Kathy and her husband Bill own and operate Santa Clara Truck Wreckers.

Napoli says, “It is time for change,” from the status quo. Napoli says that the City is facing some-serious problems, among which are the increasingly clogged roadways. She explains that what is needed is, “common sense land use planning that will allow people who work in San Jose to also live in San Jose.”

First on her list of problems is the lack of affordable housing. Rather than using the new tax increment funds (Redevelopment funds) for anything else, she is urging that the anticipated “$600 million” that is projected for the Redevelopment Agency should go towards housing.

City officials have consistently argued that only 20% of the tax increment revenues (Redevelopment Funds) is the amount allowable to be spent for housing.

Agency staff and political leaders have cleverly construed the law to arrive at this conclusion. The fact is that the law clearly states that in a Redevelopment project area “No LESS than 20 % can be spent on economic development and “No LESS than 20 % can be spent on housing.” The wording of the law was intended to protect the interests of those with housing and businesses in a “Redevelopment Project Area,” so that neither group could be excluded from consideration in the distribution of attention and revenues.

In other words, 80% of Tax Increment revenues (Redevelopment Funds) could be directed toward housing in areas designed as a Redevelopment area.

Napoli points out that millions have been spent on housing but, altogether, the City has incurred over $2.2 Billion in Redevelopment debt mostly, on large projects of dubious merit, that will slowly be paid by tax increment revenues.

Redevelopment ﬁnancing is all very complicated but once it is clearly understood, many have totally rejected this form of “urban renewal.” Since San Jose is able to incur bonded indebtedness until the year 2004 and there is the urgent need for more housing for affordable, low and very low income residents in San Jose. The expenditure of these funds for this purpose would be most welcome to those desperate for decent and affordable housing in Silicon Valley.

Napoli pointed out that, of all the candidates she has attended more planning meetings, Council meetings and City and Redevelopment Finance Committee meetings. She explained that when she was 16 she worked as an Aide in the Planning Department of the City.

Napoli proudly explained that she is a native San Josean, a graduate of San Jose State University, and does not have any intention of leaving the City. She stated that she had already bought her burial plot at a local cemetery. She added, “I want you to know that any mistakes that I make, I will have to live with them.” The two candidates that have collected the most money for their campaign, Patricia “Pat” Dando and Ron Gonzales were not born in San Jose. Dando has lived in San Jose for over 20 years. Gonzales was, until just recently a resident of Sunnyvale at which time he moved to San Jose in order to be eligible to run for mayor. Gonzales served as the mayor of Sunnyvale almost a decade ago.

Kathy asked her supporters if they would prefer to have the potholes in the streets repaired rather than have the City spend, at time, up to $ 4,000 for a single palm tree. Needless to say, the response came back loud and clear for pothole repair.

Napoli has been a tireless advocate for youth. Her list of activities relating to youth services and programs is lengthy. Besides providing a pre-school in which she now plays a more active role, Napoli has been a member of the Board of Directors for such organizations as Community Coordinated Childcare Council and the Portraits of Success, a program designed to honor the special achievements of members of the local Hispanic community as a means of providing role models for local Latino/Hispanic youth. 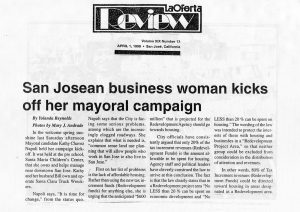 Napoli, along with the other major candidates, stresses the need for more programs directed to the City’s youth. She said that she was committed to increase after school programs and also to greatly expand the number of homework centers throughout the City. Napoli explained that, in recent years, the drop-out rate from the area schools has increased by 45% since 1985. Many attribute this phenomenon to the lack of supervised adult care and activities for youth in the after-school hours.

Napoli pointed out that there was a great need for more senior centers in San Jose. She explained that although the senior population is expected to increase to more than double in the next ten years there were six centers in 1990 in San Jose, today there are only ﬁve. Napoli was concerned that the number of fire fighters and police officers has not increased while the population of the City grew by at least 100,000 more residents. She pointed out that between 1990 and 1997, the city budget dedicated to fire and safety had decreased from 44% to 39%. City officials claim that the ratio of officers per 1,000 population is 1.5. However, that was the ratio they cited in 1990, when more money was budgeted to fire and safety. The fire department has experienced a lot of controversy. Some attribute these problems to the reduced staff, training and outdated equipment. The police department, by most standards is well managed but the ofﬁcers are spread very thin leaving very limited leeway for rotating officers out of stressful assignments in order to reduce the “burnout” rate that puts too many officers on disability long before their careers would normally end.

Napoli asked that voters join her in making a change for San Jose and appealed for their vote on June 2. She gave her supporters a list of things “to do”, She added that, “Money doesn’t mean anything. We’ve proven that

when we came together before.” Napoli was a leader in stopping the placement of the “Fallon Statue” in downtown San Jose. That statue, which cost 3/4 of million dollars is currently in storage in Oakland at a cost of almost $20,000 per year. Napoli and City Council District 1 candidate Ross Signorino led the campaign to prevent the use of and added utility tax on the residents of San Jose as a way to pay for a Giants ballpark.

Reports by others believe that Napoli will cause a runoff for mayor in the November General election. The two other major candidates have collected well over $50,000 each. In the last mayoral election, Napoli received 27.6% of the vote. Chavez pointed out that “a vote for me is a vote for yourselves.” Kathy is a well-known community advocate. Other candidates for Mayor are Bill Chew, Sam Junaidy and Dale Deitwiler.

Napoli and her husband have two sons, Michael and Bobby. Michael is currently a Junior at San Jose State University. Bobby is a Junior in high school. Her parents and numerous brothers and sisters also reside in San Jose. A niece and nephew raised by the Napoli are now grown, one is married and the other works at the truck wrecking shop.

For more information on the Napoli campaign, the telephone number is 298-1010. The campaign headquarters are at 385 Delmas Street at Auzerais street near downtown San Jose. ©La Oferta Newspaper.