Memo to visitors to Jordan (www.visitjordan.com): Besides walking in the footsteps of Jesus, Abraham, Moses, Joshua, Lot, Ruth, Elijah and John the Baptist, leave some time to browse around the Church of Saint George in the ancient town of Madaba. Why? Because history comes alive there – right under your Nikes and Skechers – on a 1,400-year-old ceramic map of The Holy Land the size of a garage floor. 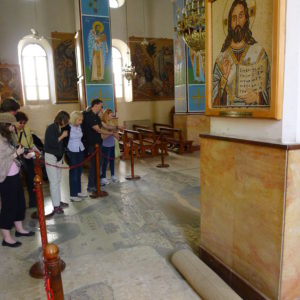 Madaba is about a half-hour’s ride south of the country’s capital at Amman. Before you got to the church, you might have stood in the shadow of Moses looking out at The Promised Land atop nearby Mount Nebo, waded in the waters where Jesus was baptized and scampered around the ramparts of crusader forts in the desert.

Made from as many as 2 million tiny tiles, the map in the Byzantine church of Saint George is believed to be the oldest surviving map of the heartland of the bible. It stretches from Lebanon south to the Nile delta and from the Mediterranean to the eastern Jordanian desert. It shows the locations of well over 100 hills, valleys, villages and towns, some with details such as the gates and churches of Jerusalem and a ring of palm trees around Jericho.

When it was discovered in the late 1800s, the map was an historical bombshell. Many of its locations (tagged in Greek) easily translated to biblical names, but one sent historians and archaeologists into a frenzy of joy. That was the site of the city of Zoar.

And what was the purpose of the map? Again from Aballah: “That’s still a mystery, too, but there’s a good chance it was a road map for pilgrims heading to The Holy Land.

Besides checking out the map, you could spend a lot more time in Madaba at other historic churches, many of which also had sprawling mosaics (but not maps of the area). Also packing in tourists around the town are the remains of sites where the flags of everyone from Israelite kings to Islamic caliphs once flew. 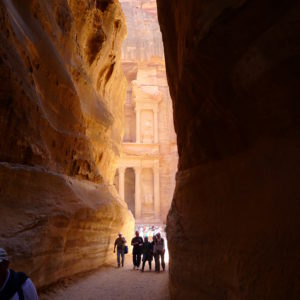 After all that, and maybe picking up a few scarfs, water pipes, camel’s hair purses, silverware and “I (heart) Madaba” tee-shirts in the city’s wall-to-wall souvenir shops, you’re ready to get back on the highway for a short ride to the Dead Sea.

Perhaps you’ll spend the night at a luxury resort there, maybe even treat yourself to a mud-covered dip in the sea.

Get a good rest, because you’ll need it the next day for your tour of the miles of cliffside ruins at Petra – Jordan’s No. 1 tourist attraction – 130 or so miles down the highway.