Lima, Sep 7 (EFE).- Archaeologists say they have found a group of more than 13 graves dating back to the 15th and 16th centuries around the ruins of an ancient temple on Peru’s northern coast, including the remains of two footless children who may have been sacrificed as an offering at the ceremonial complex.


The site was found during excavation work in July at the Chotuna-Chornancap site, which is located in the northern region of Lambayeque and headed by a Culture Ministry unit under the direction of archaeologist Carlos Wester La Torre.


The graves date to the 15th and 16th centuries, the era of the Chimu-Inca culture, and contain ceramic offerings and decorative elements, the unit said in a statement Tuesday.
Wester La Torre said a noteworthy find were the remains of six children who had been placed in pairs of shallow graves located on the north, east and west ends of the ruins.


The remains of the two children buried on the west end are footless, as if those extremities had been amputated, leading the archaeologists to speculate that they had been sacrificed and used as ceremonial “guardians” of the other tombs.


The remains of the other individuals – men and women – were buried face-up in narrow and long graves.
Intentional distortions in some of the bodies may indicate intensive ritualistic activities and probably human sacrifice in some cases, the statement said. 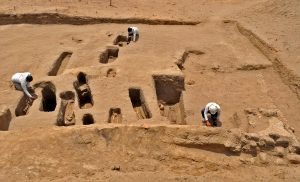 The most prominent person buried at the site was found in a grave located at the center of the funeral group and containing offerings similar to those depicted in a polychromatic painting that was discovered earlier in the Chornancap temple and which features some individuals with staffs and others who are headless.


Among the offerings found in that grave were two clay pots and a sculpted vessel in a shape suggesting the head of a “coquero,” a coca-leaf chewer.


Archaeologists also discovered another sculpted vessel in the shape of a male standing up and smiling.
Discoveries at the Chotuna-Chornancap archaeological site in recent years indicate the temple was a seat of power in the Lambayeque period, which stretched from the eighth to the 14th centuries A.D., and a sacred space whose greatest treasure has been the tomb of the Chornancap priestess, discovered in 2011.


“The archaeological excavations in this season have begun to yield results that allow an understanding of the function of places such as Chornancap, which since the discovery of the priestess’ grave has continued to reveal the complex array of ceremonies and rites that occurred at the temple,” Wester La Torre said.