Most Americans never heard of them, but a band of young singers from the West Indies came up with one of the United Kingdom’s 10 best selling single records of all time. Named after an Australian detective series featuring a part-Aboriginal inspector named Napoleon Bonaparte, the group was living in Germany at the time, and they waxed two ageless reggae songs with all kinds of diverse influences that – oddly – fit together like a jigsaw puzzle.

Try to imagine locking up these pieces of the puzzle: Sitting down by the Tigris and Euphrates rivers, dancing to a traditional Jamaican children’s ditty, the destruction of Jerusalem by King Nebuchanezzar and the captivity of the Jewish intelligentsia in Babylon. Then top all this off with Bible-based lyrics that helped spark a global religion whose deity is a 20th century Ethiopian emperor believed to be the 225th descendant of King Solomon and Makeda, the Queen of Sheba.

The band, a reggae/disco group improbably named Boney M., was tagged by its founder after an Australian TV series called Boney (from the sleuth’s nickname, but the origin of the M is kind of fuzzy).

They hit the big time in the late 70s with a booty-swinging version of a song – By the Rivers of Babylon (https://www.youtube.com/watch?v=l3QxT-w3WMo) – with lyrics straight out of the biblical Book of Psalms. Besides topping the charts in the U.K., it scored No. 1 in Austria, Switzerland, The Netherlands and other countries across Europe when it was released in 1978.

Female members of the original Boney M. band were from the Caribbean islands of Montserrat and Jamaica, while the one male member of the group was an exotic dancer from Aruba. 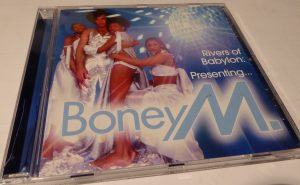 The song, a reggae classic and an anthem of the Rastafarian religion, enjoyed a burst of popularity eight years earlier when it debuted by a Jamaican group called the Melodians. Adapted from psalms of the Jews’ exile in Babylon in the 6th century B.C., the lyrics start this way: “By the Rivers of Babylon, where he sat down, and there he wept, when he remembered Zion.”

In a popular version of the song, the words go on: “… the wicked carried us away (to) captivity, required from us a song. How can we sing King Alpha’s (Ethiopian Emperor Haile Selassie’s) song in a strange land?”

Later versions of Rivers of Babylon were recorded by heavyweight American singers of the likes of Linda Ronstadt, Steve Earle and the Neville Brothers, among others. And the tune took on hipper vibes when it was cut by jazz flautist Herbie Mann.

The “B” or flip side of the record – Brown Girl in the Ring (https://www.youtube.com/watch?v=GiX2PbrBXCQ) – took off when the popularity of the “A” or “Rivers” side started to slip. Adapted from a traditional West Indian (probably Jamaican) kids’ game, Boney M.’s reggae version starts off: “There’s a brown girl in the ring, tra la la la la… it looks like a sugar in a plum.” The lyrics continue: “Show me your motion, tra la la la la…”

Global travelers will see children playing the game in different ways, often by first forming a circle and holding hands while they sing the song. One youngster goes to the center of the ring and skips around to the beat.

When the lyrics get to the line “show me your motion” the tot shows off her “moves,” then chooses a partner or someone else to become the next girl in the ring, and the game starts all over again.