After traveling all over the globe I finally came to a conclusion that living in California, one of the top tourists destination in the world, its time for me to explore some of the near-by destinations in my own home state. With my new motto of “you don’t have to go away – to get away,” I bid farewell, at least for a while, to the mandatory three-hour pre-departure arrival to the Bay Area’s airports while anxiously zigzagging between the endless lanes in hope of finding a parking spot at the long-term parking area.

The tedious and time consuming travelogue saga is extended for additional thirty minutes of constant stops as I rattle along on the complimentary airport shuttle’s route to finally reach my designated International Terminal (now why on earth would they call an airport building a Terminal.. that’s morbid). Well, the soap opera continues as I submit myself to the lengthy airports security checkpoints, schlep around my over-sized carry-on luggage ( I hear the airlines now decided to charge even for our carry-ons..) as I finally reach my seat on the packed plane…Phew… 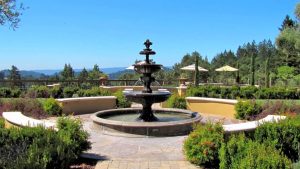 But with my new decision to travel locally, this is all behind me now. California, here I come! I am free as a bird! This is leisure and casual time on my traveling agenda! Dressed in my comfy sweats and the Nike’s high heals-less sport shoes, sans my heavy mascara, shiny lipstick and my usual perfectly coiffured du, I jump into my sporty red Beemer, turn on the radio’s dial to my favorite country music station and head to my newly to be discovered and hopefully enjoyable Golden State destination: The picturesque Regale Winery in the hills of Los Gatos, located only twenty five minutes drive from my home.

The sprawling grounds of Regale Winery encompass the tranquil but not imposing Tuscan style architecture of its stately winery’s guest house with a second floor dining room which features a vaulted travertine ceiling, Italian fresco paintings, ornate fireplace and a heated, open-air terrace with breathtaking views of the coastal range and winery’s open gardens, featuring three varieties of olive trees with hand-picked and pressed olives to produce the estate’s olive oil. 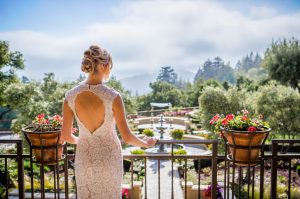 Origin: Regale has been an English verb since at least 1656; it was adapted from French régaler, which has the same meaning as “regale.” The French verb goes back to Middle French galer, which means “to have a good time,” and to Old French gale, meaning “pleasure.”

Regale Winery and Vineyards definitely live up to its description of the original meaning of the word Regale. Its comparison to one of Italy’s most popular and lovely destination of Tuscany is perfect, with one important exception: it is located right in my almost backyard. www.regalewine.com, 24040 Summit Road in Los Gatos. 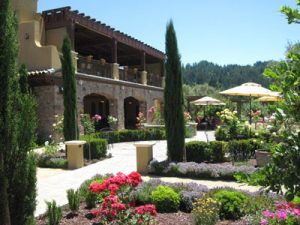 This was a wonderful debut to my exploration of California. “Dora the Explorer” would have been proud of me, for sure.

On my inaugural journey of discovering the Golden State I think I did achieve my aim. Next time join me on my travels north via Highways 101 to the Francis Ford Coppola Winery & Museum in Geyserville in Sonoma County and down south to the Pacific Coastal’s Cambria, the jewel on the Moonstone Beach in San Luis Obispo County.