Vacationers lucky enough to be in Costa Rica on April 11 have a special treat in store. It’s what amounts to a country-wide party, celebrated at street dances, in bars and restaurants and at backyard barbecues – and tourists are welcome to join in the fun.

That day, a national holiday, honors a lad named Juan Santamaria who made his mark on Costa Rican history 161 years ago. Look close, and you’ll see his name on the terminal of the country’s main airport at San Jose. You’ll also spot that name on avenues, statues, parks, plazas and shopping centers. Even on casinos.

Back in April of 1856 Americans were in a bitter election year. Few were aware (or even cared about) a drama playing out thousands of miles south of the border. Among the main players were an American billionaire and his vast steamship empire, a mercenary army hired by the billionaire, a Nicaraguan rebel army, the U.S. Congress, what later turned out to be the Panama Canal and Santamaria, a 25-year-old drummer boy in the Costa Rican army.

When gold was discovered in Northern California in the mid-1800s, railroad magnate Cornelius Vanderbilt hit paydirt with a fleet of steamships carrying miners down the east coast to ports in Nicaragua, where they hopped on smaller steamers (also owned by Vanderbilt) to cross the country on river routes through the jungles.

On the other side, Vanderbilt’s bigger steamships waited to take them up the Pacific shores to San Francisco and riches in the gold fields.

At the time, France had struck out in an attempt to dig a 50-mile-long canal out of the muck and jungles of Panama, and the U.S. congress was mulling heavy lobbying to take over the failed French venture in Panama. Vanderbilt, on the other hand, was said to be putting pressure on Congress to instead build a canal across Nicaragua by linking up the country’s lakes and rivers (over which he already operated a transport service). But Congress was reluctant to act, one reason being that rebels threatened to unseat the government of Nicaragua. 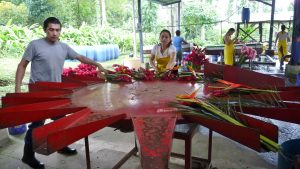 Congress could hardly back the Nicaragua project in the middle of a rebellion, so Vanderbilt stepped in to restore stability to the country – by footing the bill for an army of American mercenaries to boot out the rebels.

Led by a 30-year-old adventurer named William Walker (who’d once tried to invade Mexico), the mercs earned their keep and sent the rebels packing. But then Walker double-crossed Vanderbilt. He took over the government, declared himself president and renamed the country “Walkeragua” (with English as its official language). While he was at it, he also took over Vanderbilt’s trans-Nicaragua water transit system.

Vanderbilt retaliated by getting his buddy, President Juan Rafael Mora of neighboring Costa Rica, to declare war on Walker.

A few weeks after the Costa Ricans crossed the border a key battle took place in the city of Rivas in southwest Nicaragua. In the high point of the fight, the Costa Ricans found themselves pinned down by Walker’s men, who’d holed up in a strategically located building. But drummer boy Santamaria saved the day when he volunteered to toss a torch on the thatched rood of the building, even if it meant exposing himself to heavy fire.

The boy’s plan worked. The enemy abandoned the building, letting the Costa Ricans move on to occupy the town. But the victory turned out to be bittersweet because the boy was gunned down by an enemy sniper.

Santamaria has been remembered ever since on the day of the battle, April 11.