Caracas, May 1 (EFE).- The Venezuelan opposition in the MUD coalition on Monday called upon the “people” to “rebel” against the “fraudulent” assembly called by President Nicolas Maduro to modify the constitution, saying that it is designed to dissolve the republic and constitutes a coup d’etat.

“What happened (on Monday) … is the most serious coup d’etat in Venezuelan history: it’s Nicolas Maduro dissolving democracy and … the republic. In the face of that, we of the (MUD allience) and lawmakers of the National Assembly call on the people of Venezuela to rebel,” said the head of the opposition-controlled Parliament, Julio Borges, as the MUD spokesman.

The lawmaker said at a press conference that the constitutional assembly “is a scam to deceive the Venezuelan people” with a mechanism that “aggravates” the coup d’etat being staged by the government and destroys the Constitution, democracy and the electoral process.

Maduro on Monday issued a call to “the working class” to convene a National Constitutional Assembly, saying that he has no other alternative and that in this way peace can be achieved in the country and the “coup d’etat” he says is being staged by the opposition can be defeated.

Maduro made the announcement at a huge workers event in Caracas, explaining that the new assembly will be comprised of elected representatives to “strengthen the pioneering, wise and Bolivarian constitution of 1999,” which was pushed by late President Hugo Chavez when he came to power.

“I assume all the consequences and responsibilities, and I call on the people to prepare themselves for a great constitutional victory, a popular victory,” he said, adding that “later” he will explain the details of the measure he had announced but that within “the coming hours” he will inform the Electoral Authority of “the electoral basis” for the move.

He said that the people will elect some 500 representatives to the assembly, with some 200-250 of them coming from the working class, the communes, the country’s Indians, and others.

Earlier on Monday, Venezuelan security forces broke up a demonstration in Caracas by thousands of opposition protesters who were headed for the Supreme Court of Justice (TSJ), EFE observed.

Opposition members decided to take Avenida Boyaca – an expressway that connects the east and west sides of the capital – to march on the TSJ in downtown Caracas, where they were scattered by tear gas.

EFE saw that some of the protesters were hurt by the tear gas and were treated on the spot, while two others were evacuated. 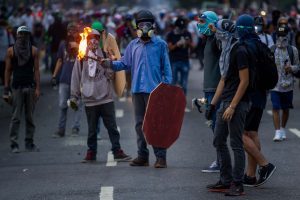 Two-time opposition candidate for the Venezuelan presidency, Henrique Capriles, who took part in the demonstration, posted a video on Twitter showing a group of protesters trying to help another who is lying on the ground.

Earlier in the day, a number of opposition lawmakers said the authorities at some points along the way tried to disperse the west-to-east marches in Caracas that were headed for the National Electoral Council (CNE), also in the downtown area.

Downtown Caracas is an area where the authorities do not generally allow protests to avoid disturbances like those in February 2014, when an opposition march reached the Attorney General’s Office and caused serious damage to the building, violence in which three people were killed.