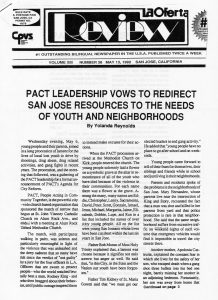 Wednesday evening, May 6, young people and their parents, joined in a long procession of lament for the lives of local lost youth to drive by shootings, drug abuse, drug related activities, and gang fights in recent years. The procession. and the meeting that followed, was a gathering of the PACT leadership for a formal announcement of PACT‘s Agenda for City Reform.

PACT, People Acting in Community together, is the powerful city wide church based organization that sponsored the march of sorrow that began at St. John Vianney Catholic Church on Alum Rock Ave., and ended with a meeting at Alum Rock United Methodist Church.

The march, with participants walking in pairs, was solemn and particularly meaningful in light of the violence that was unleashed and the deep sadness that so many have felt since the verdict of “not guilty” by a jury for the four ofﬁcers in L.A. Ofﬁcers that are sworn to protect people – who the world watched brutally beat a man, Rodney King- and who then bragged about their behavior, until public outrage inspired them to instead make excuses for their actions.

When the PACT procession arrived at the Methodist Church on Kirk, people entered the church. The young people solemnly laid a ﬂower on a symbolic grave at the altar in remembrance of all of the youth who have died because of the violence in their communities. For each name, there was a ﬂower at the grave. Among the many, many names are Eddie, Christopher, Lenny, Sacramento, David, Peter, Scott, Gonzalo, Ismael, Jesus, Michael, Margarita, Jaime, Elizabeth, Debbie, Lupe, and Ron in a list that included the names of over young people. All on the list were San Joseans whose lives have been cut short within the last six years in San Jose.

Father Bob Moran of Most Holy Trinity explained that, a lament was chosen because it signiﬁes not only sorrow but anger as well. He said that, “in this City, in the State and the Nation our youth have been forgotten.

Father Tim Kidney of St. Maria Goretti said that “we must get our elected leaders to end gang activity.” He added that “young people have no place to go after school and on weekends.

Young people came forward to tell of their fears for themselves, their siblings and friends while in school and just living in their neighborhoods.

Parents and residents spoke of the problems in the neighborhoods of San Jose. Mary Hernandez, whose parents live near the intersection of King and Story, recounted the fact that a man was shot and killed in her parents front yard and that police protection is rare in that neighborhood. She said that the same neighborhood suffers from excessive trafﬁc on weekend nights of such volume that emergency vehicles would ﬁnd it impossible to travel the city streets there.

Another mother, Apolonia Castruita, explained the constant fear in which she lives for the safety of he son, who escaped death when a gang shot three bullets into his bed one night, barely missing her mother in an adjoining bedroom. Fortunately, her son was away from home that night. When she asked the police for help she said that she was told that she should send her son away because the gang would return. Castruita protested “what kind of police protection is that?”

Another mother, Ana de Dios, related that her son was hit so hardwith a police baton in the driveway of her home that she when she saw her son that night, she thought at first that he was dead. She pleaded “I ask that you not destroy our children – please help us.”

PACT leaders then presented their platform for the rebuilding of San Jose’s neighborhoods. They have scheduled a series of community meetings in which they are requesting particular programs for the neighborhood they will meet on May 13 with Councilwoman Blanca Alvarado for discussions that will focus on after school programs for the youth at St. John Vianney at 7:30 p.m. On May 18, at St. Maria Goretti 7:00 p.m., PACT will meet with Councilman George Shirakawa to focus on the opening of school gyms in that neighborhood on nights and weekends and seeing that the city provides appropriate staff supervision.

PACT asserts that the City’s priorities are misdirected and must be changed. PACT has carefully documented evidence for its conclusion that San Jose’s Redevelopment Agency is “mismanaged” and add that they have serious concerns about the financing plan of using taxpayer dollars for the construction of a stadium for the Giant’s hall team, which is owned by a multi-millionaire San Franciscan, Bob Lurie.

PACT says that, as a consequence of the City’s priorities, neighborhoods in the City have been neglected, causing ﬁt pain and suffering. Those projects that the City has undertaken have gone to projects of dubious merit and seem to favor a select few such developers as Lew Wolfe and Phil de Napoli and others such as the San Francisco family of the Swig’s. All are persons of great wealth, whose recent business interests in San Jose (hotel and commercial ofﬁce interests) have been handsomely subsidized by the taxpayers of San Jose.

Reverend Paul Wiberg strongly protested the Giant’s Stadium Financing Plan and Campaign. He said that, “what the Giant’s campaign claims is not supported by fact and that their promises of what the tax will provide for its citizens is a lie.”

Father Bob Moran reminded the PACT leadership that “what San Jose is, LA. once was, and what LA. is, San Jose could become.” He added that, “San Jose leaders seem more interested in community buildings than in building communities.”

PACT leaders vowed to adopt the PACT platform and to work diligently to take their message out to the community. They count their active membership, in San Jose alone, to be 35,000 families.

Another meeting is scheduled by PACT for May, 28 at Most Holy Trinity Church at 7:30 p.m. with the District 8 City Council candidates.