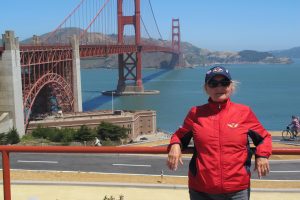 This golden girl has spanned our hearts for 80 years

Tony Bennett left his heart in San Francisco in 1962. I discovered mine recently while taking a leisurely walk on the city’s legendary Golden Gate Bridge. Photographed more often than Marilyn Monroe, the Golden Gate Bridge is instantaneously recognized globally as the symbol of San Francisco and as the most stunning port of entry in the world.
According to the San Francisco historian Jim Van Buskirk, the Golden Gate Bridge surpasses the Statue of Liberty and the Empire State Building in being featured prominently in over 70 movies. This love affair with the movies dates back to 1935 with “Stranded,” a drama featuring footage of the bridge under construction. Glowing with its reddish-orange color—or to be precise, International Orange, the bridge’s official color—the 80-year-old never looked grander or more regal in the early afternoon sun.

The Color Is Born

The Golden Gate Bridge is reddish-orange because Irving F. Morrow (American, 1884–1952), the consulting architect of the Golden Gate Bridge, made the decision. Morrow designed the bridge’s art deco look and in his 1935 report to the bridge’s Board of Directors, made the case for what was considered a wild color in the 1930s. “The Golden Gate Bridge is to be the longest suspension bridge in the world,” Morrow wrote. “It is one of the greatest monuments of all time. Its unprecedented size and scale call for unique and unconventional treatment. What has been thus played up in form should not be let down in color.” 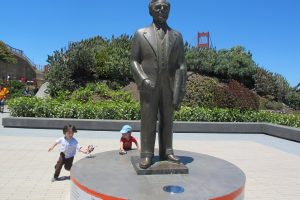 Morrow took the job of selecting a color for the bridge very seriously. His “Report on Color and Lighting for the Golden Gate Bridge, San Francisco” communicates his commitment to convince others of the importance of the matter. Morrow wanted the color to complement the changes of weather of the San Francisco Bay, with its gray fog, the golden-and-green hills, the blue water and sky.

In his report, he proposed: “It is well recognized that the color of a structure has important influence on its appearance and on its relation to its surroundings. “The Golden Gate Bridge is a scenic feature which demands all possible respect because of (a) its intrinsic beauty; (b) its great renown; and (c) its strong and long-standing sentimental attachment in the minds of inhabitants of the San Francisco Bay region. Poorly chosen color may actually create disharmony between the structure and the site.”

The University of California at Berkeley provides a quick overview of how International Orange was selected for use on the bridge: Chief engineer Joseph Strauss and his colleagues intended to select a paint that would withstand the harsh winds, weather, and the corrosive salt air—constant factors for a bridge that would be located across the Golden Gate. Following a year of testing paints and colors, the possible choices were carbon black, steel gray, and orange. Some felt that this bridge, like others, should be black, gray, and silver.

Morrow was critical of the three standard colors recommended by the bridge’s Board of Directors: “Black will reduce the scale of the bridge. Gray is not at all distinctive. Silvery—a color more suitable for the dirigible aircraft,” were the architect’s comments.

During construction of the bridge, the reddish-orange color of the primer coat caught Morrow’s eye. It also captivated the local citizens’ enthusiasm. They provided significant public support for the red undercoat used to protect the steel by urging Morrow to make it permanent. 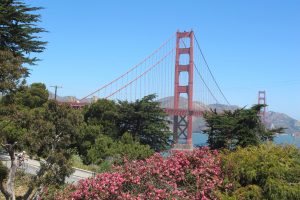 The following letters—each regarding the color of the bridge—were received by Irving Morrow. The majority of the letters were on view at A Wild Flight of the Imagination: The Story of the Golden Gate Bridge, which was on exhibit at the California Historical Society in San Francisco. The glass cases showcasing these letters were framed and painted with the International Orange color used to paint the bridge.

– “Of the very limited range of possible colors, there is one which, I feel sure, will bring out the instant beauty of the bridge and at the same time will fit into the landscape. During the construction of the bridge, I was struck by the extraordinary beauty and richness in tone of the red color.

-“If a paint of this value were applied, the Golden Gate Bridge would stand out against its surroundings without danger of ruining one of the most beautiful harbor entrances of the world,” wrote E.P. Meinecke, of the Bureau of Plant Industry, U.S. Department of Agriculture, Feb. 23, 1935.

– “The directors should not try to be smarter than God,” wrote Maynard Dixon, a 20th-century American artist, March 9, 1935. A California native, Dixon’s body of work focused on the American West. His colorful mural adorns a banquet hall at the Mark Hopkins Hotel in San Francisco.

– “Do you cross the Bay often? Have you seen the bridge towers in the morning, at evening, in the fog, the sunshine? It reminded me of an old lacquered tori of Japan. This color seems to belong to the landscape, to sky, hills and water,” wrote Miss Ashton Dovell, secretary of the Council for the Protection of Roadside Beauty, Jan. 14, 1935.

– “Let me hope that the color will remain the red terracotta because it adds to the great beauty and the colorful symphony of the hills,” wrote Beniamino Benvenuto Bufano (1890–1970), a California-based Italian-American sculptor. Examples of his distinctive and large-scale work are found throughout the San Francisco Bay Area.

– “May I congratulate you on a beautiful bridge. I have seen many bridges in many parts of the world, and never have I seen a bridge more beautiful. Not only the simple, graceful lines, but the colors are perfect. It is one of the most aesthetically pleasing engineering projects I ever hope to see.

Upon completion of the Golden Gate Bridge in May 1937, chief engineer Joseph Strauss wrote a poem:
The Mighty Task Is Done
At last the mighty task is done;
Resplendent in the western sun
The Bridge looms mountain high;
Its titan piers grip ocean floor,
Its great steel arms link shore with shore,
Its towers pierce the sky.

The 1.7 mile steel suspension bridge, one of the modern Wonders of the World, opened to traffic on May 27, 1937.

Keeping the Bridge Beautiful
To paint more than 10 million square feet of steel requires 5,000 to 10,000 gallons of paint yearly. The bridge is constantly touched up, not just to keep up the color, but also to protect it from salty weather. Golden Gate Bridge public affairs director said that the rumor that the bridge is painted from one end to the other and back again is untrue: “It’s a myth,” she said with conviction. Inspections are formally conducted every two years, and a detailed report on the condition of the bridge is prepared. The report lists the corrosion locations and the need for the painters to interrupt their regularly scheduled work and direct their attention to the small jobs of repairing the damage and painting over the corrosion. Thus paint inspectors provide specific instructions that the painters simply follow. “To be a Golden Gate Bridge painter is a very sought-after job. The team of 30 painters are well-trained in teams as well as individually and are supplied with absolutely the very best equipment to work with. They work daily on moving scaffolding in strong winds, high above the bay. Most have been working there for 20 years. It is very challenging and hard work, and that’s why their safety is our number-one priority.”

The Wind Around the Bridge
While enjoying my two hours’ “walk of fame” along the Golden Gate Bridge, I noticed quite a few baseball caps, visors, and even a flip-flop outside the railing of the bridge.

When I mentioned this “gone with the wind” head-gear phenomenon to Ms. Currie, she recollected: “The bridge painters used to collect the ‘lost in the wind’ paraphernalia and exhibit it for the visitors to see and learn to ‘hold on to their covers’ while enjoying their stroll, but this tradition ended in 1990.”

If the wind causes loss for some, it provides gain to others. Norbert Bajurin, commodore of San Francisco’s Golden Gate Yacht Club, established in 1939, expressed his excitement in showcasing the Golden Gate Bridge. Six teams from six countries enjoyed the magnificent view during the 2013 America’s Cup Race. “And we were fortunate to have good winds,” he added with a smile.

Happy 80th Birthday to the Golden Girl! Let’s make a date for your centennial celebration in 2037.