Do you know who John Canoe was? Probably not – unless you live around the Caribbean. Or in a few places on the Caribbean Rim in Central America. But though he’s hardly a household name, at certain times of the year thousands of tourists pack these spots to enjoy Canoe’s legacy at Mardi Gras-like “Junkanoo” festivals

With only a little nudge, John Canoe turns into Junkanoo. Get it?

A popular legend (among many) goes back to the early 18th century, when Canoe, said to have been a West African chief, led his Ashante and Nzima warriors to a great victory over an army of English-backed invaders. But the victory – believed to have been on Dec. 26, 1708 – was short-lived, and many of Canoe’s fighters ended up as slaves on Caribbean plantations, mainly in the British West Indies. 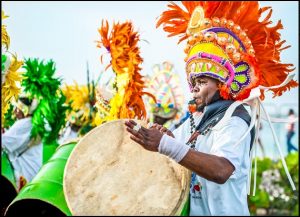 The slaves brought their traditions with them, one of which was an annual celebration of Canoe’s triumph. So on Dec. 26 when the West Indian slavemasters were recovering from their Christmas excesses, legend has it their workers were freed to frolic that day at street dances and marches dressed in colorful and often scary outfits (mimicking the bizarre clothes worn by Canoe’s troops to frighten their enemies).

In another version of the story, that day off on the 26th stretched to a three-day holiday allowing the slaves to go carousing from house to house decked out in wacky costumes and often getting around on stilts.

Whatever the roots, the revelry of Junkanoo celebrations today draws mobs of tourists to a number of Caribbean islands, most notably Jamaica and The Bahamas. The latter country not only goes bonkers with carnivals on Dec. 26 but also on Jan. 1 and during a summer festival (https://www.bahamas.com/junkanoo-summer-festival-2017) in July.

The wildest, most colorful and largest of the celebrations in The Bahamas is staged in Nassau, the country’s capital.

Thousands of masked dancers in outlandish costumes parade through the downtown streets to the pounding beat of African drums, blaring brass, whistles and cowbells as onlookers scramble to find room in bleachers, on benches, on the sidewalks and curbs, in storefronts, on balconies and even in trees. Later, judges award prizes for the best music, costume and group.

Where did the name John Canoe come from? No one knows for sure, but it could be a morphed version of John Conny, an 18th century West African king who ruled a gold-rich country now called Ghana (which was Canoe’s homeland, too).

In yet another explanation, Canoe was a European corruption of the African city of Kenu in today’s nearby Nigeria.

The name John could have been taken from the English traders who did business on the Gold Coast of Ghana.