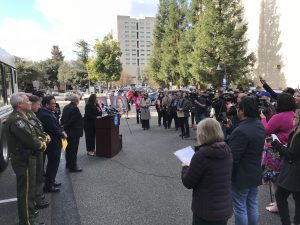 On the anniversary of President Trump’s Inauguration, the County of Santa Clara launched a Countywide Media Campaign to convey a unified message in support of immigrants in Santa Clara County. County elected officials, County Executives, Consulates, and Community based organizations joined forces today to demonstrate their commitment to echoing “One Voice for Immigrant Communities.”

The media campaign seeks to reach all immigrant communities across Santa Clara County, including recent arrivals, monolingual immigrants, the undocumented, women and LGBTQ individuals. Key information to reassure the immigrant community of the County’s support will be displayed on VTA buses, public transportation shelters and the County of Santa Clara Office of Immigrant Relations website. Materials will be shared with partners within and beyond Santa Clara County.

The media campaign message is clear and simple: the County of Santa Clara welcomes immigrants and recognizes their many contributions to our society. The campaign’s linguistically diverse content conveys the cultural richness of our region, with the purpose of improving the County’s ability to reach all residents and inform them of the multiple services that are available to them – regardless of their immigration status.

ABOUT THE COUNTY OF SANTA CLARA

The County provides essential services including public health protection, environmental protection, medical services through Santa Clara Valley Medical Center (SCVMC), child and adult protection services, homelessness prevention and solutions, roads, park services, libraries, emergency response to disasters, protection of minority communities and those under threat, access to a fair criminal justice system, and scores of other services, particularly for those members of our community in the greatest need.