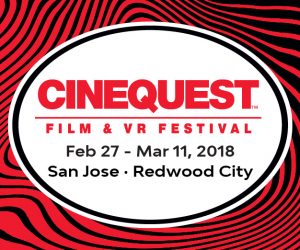 Taking place in San Jose, one of the most ethnically diverse metros in the United States, the Cinequest Film & VR Festival returns for its 28th season, February 27th – March 11th. Representing the voice of the more than 55 million Latinos in the U.S. and the culture and flavor of San Jose, this year’s program features a the work of Latino and Spanish-language directors and actors, and explorations of heroes of Hispanic heritage.

In the special event, Courageous Conversation, presented by Bank of America, the feature-length documentary, Adios Amor: The Search for Maria Moreno will have its world premiere, followed by a conversation with its director, Laurie Coyles. The film investigates the story of Maria Moreno, a mother of 12 that became the voice of activism for the California farm-workers community in the 1950s. This remarkable story about the migrant workers who put food on all our tables explores enduring questions about whose lives we remember, record, and recognize.

Over the 13-day festival, 229 feature and short films and 29 virtual reality experiences will be shown across downtown San Jose theatres and venues, and a satellite cinema in Redwood City for an audience of more than 105,000 attendees. 52 celebrations and special events round out the offerings amounting to 510 screenings, events, parties and experiences.

To learn more about the full festival lineup, and to purchase festival passes, tickets to screenings and special events, visit www.cinequest.org.

Highlights of Latino Cinema at CQ2018:

All the Reasons to Forget (Directed by Pedro Coutinho; US premiere)

Emotionally tone deaf, Antonio can’t seem to understand why Sofia, his girlfriend of two years, has left him. But she has, and now Antonio must face the perils of dating apps and come to understand the ultimate question: who is Antonio without Sofia? Hilarious but equally honest, Antonio finds moving on harder than anticipated. Drunken nights, failed hookups, and an inability to convince Sofia of his newfound emotional maturity ultimately lead Antonio closer to the core of who he is without her.

Fabian is an astronomer on a quest to discover the nature of an unknown object near the Cygnus constellation, 37,000 light years from earth. He travels to an observatory, hoping to use its powerful telescopes to uncover the answers he seeks. One night, a strange signal provides Fabian with the hope that he might be close to solving the mystery of Cygnus. As Fabian investigates further, he finds that not all is as it appears, and he begins to wonder who he can trust in his quest for the truth.

A family is in shambles. The matriarch Paty is addicted to gambling, which makes her husband Rodrigo kick her out of the house. The elder son Luis has his own relationship issues – his fiancé wants to cancel their wedding. The younger son Carlos just wants his family to make peace and believes he can make that happen. In between all the mayhem and chaos, there occurs an accident that would change the course of the family. When a doctor announces that one of them may not make it through the night, they all must reconsider their choices. Preceded by the short film Rino, from director Ricardo Herrera. 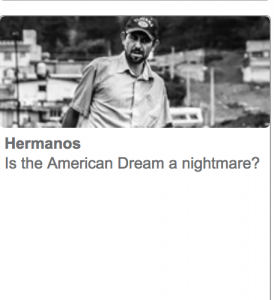 A former pageant queen who has lost her house, believes the path to American salvation runs through Donald Trump while two brothers attempt to return to the U.S. after being deported. These dissimilar lives, presented in parallel, reveal surprisingly similar challenges for both Mexicans and Americans. Will they find answers to the most difficult questions about immigration, national identity, and perhaps the most troubling of all – who belongs where in these United States? Told through intimate moments and dynamic interchanges, Hermanos examines family relationships, new economic realities, and questions of religion and politics.

Marisa in the Woods (Directed by Antonio Morales; US premiere)

Marisa feels like a supporting actress in her own life, always there for other people. She’s the sole savior of her best friend, who is hysterical and bedridden after recently breaking up with the love of her life. As Marisa visits her other friends, they reveal to her their deepest personal problems. With the weight of others already on her shoulders, her dramatic writing troupe, her personal expression, drops her. Marisa can only find comfort in the city nightlife. She is ready to disappear into the surreal unreality of the woods.

Somewhere in the Caribbean, in a future that never was… Thus begins this zany tale of love and time travel. Laura, frustrated and ready to leave the predictable Diego, agrees to one more weekend to rekindle things, but will her macho ex-boyfriend win her back instead? At the motel where they started their steamy relationship, now abandoned and decaying, Diego tries to win Laura back – again and again and again – all the while comically dealing with their past and future selves. Can he teach his past self how to please Laura and once more win her over?

Visit www.cinequest.org for the full program of Cinequest Film & VR Festival 2018, and to purchase passes and tickets to screenings and events.

More than 105,000 attendees will experience the work of internationally renowned and emerging artists and technologists, representing a spectrum of genres, genders, ethnicities, orientations, and viewpoints.

Media Legacy Award will be presented to Ben Mankiewicz, Primetime Host Turner Classic Movies (TCM) celebrating his incredible life and impact on the industry, as a writer, journalist and co-founder of The Young Turks.

A vanguard organization set in the Silicon Valley, Cinequest’s uniqueness and impact result from being ahead of the curve in the powerful integration of creativity and technology. Cinequest fuses the world of the filmed arts with that of Silicon Valley’s innovation to empower youth, artists, and innovators to create and connect – driving transformations and a better tomorrow. Cinequest does this through Cinequest Film & VR Festival, Picture The Possibilities, and its sister company Cinequest Mavericks Studio. (Voted Best Film Festival by USA Today Readers.)