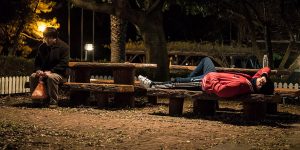 San José, Feb. 23 –  After a warmly received World Premiere at the 2017 Toronto International Film Festival, the acclaimed South Korean dramedy THE POET AND THE BOY will have its U.S. Premiere in competition at the world renowned 2018 Cinequest Film and VR Film Festival, running February 27 -March 11th.

A moving, and often funny tale, THE POET AND THE BOY is the story of a struggling poet in his late 30s, who has spent all his life in a small island town, living off his hard working wife. Despite his wife’s constant nagging about having a family and his inability to carry his share in the relationship, all he does is think about his writing. One day, the poet meets a teenage boy working at a donut shop and helplessly develops feelings he has never had before, leading to both dramatic and comedic consequences.

The film is being distributed by the respected indie distributor ALTERED INNOCENCE, whose previous releases have included such acclaimed titles as Berlin Festival winner VIOLET and SLEEPING GIANT, winner of Best First Canadian Feature at the Toronto International Film Festival. A national theatrical release is slated for Summer 2018 in association with Ryan Bruce Levey Film Distribution and PR Services.

ALTERED INNOCENCE is a unique distribution outlet specializing in youth and LGBTQ coming of age films founded in 2016 by Strand Releasing distribution veteran Frank Jaffe, the only distributor of its kind in North America.